Comedian and 30 Rock star Tracy Morgan has been tapped to host the 2013 Billboard Music Awards this month. We’ve got 10 reasons why this was a risky — yet awesome — move. 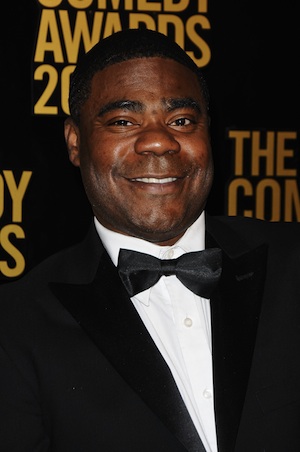 Did Seth MacFarlane really upset all of those actresses at the Oscars? >>

And then there’s Tracy Morgan, who will be hosting the Billboard Music Awards on Sunday, May 19 on ABC. He certainly fits into the wildcard category.

Morgan has never shied away from controversy and has certainly had his fair share of run-ins with the law. So is asking Tracy to host the Billboard Music Awards a genius move? My answer is a very simple and astounding yes!

Here are the 10 reasons Tracy Morgan will rock the Billboard Music Awards.

You have no idea what he is going to say

You have to admit, even the Billboard Music Awards know that they could have made a big mistake asking Tracy to host. I mean, what if he says something totally outrageous? He certainly has had his fair share of… let’s say unscripted moments. Often, you aren’t even sure if he was being serious or, quite possibly, drunk.

Tracy Morgan hosting the Billboard Music Awards is like watching Here Comes Honey Boo Boo but not in the train wreck kind of way. You have to watch because you have no idea what he is going to say next. You just have to watch.

A good host can’t be afraid to look silly

Well, Tracy’s got that locked up. A great host can’t be afraid of looking crazy, and Tracy certainly isn’t afraid of that. Anyone who can run around on a network show in his underpants swinging a lightsaber is OK in my book.

Check out Tracy and Chris Rock singing with “Simon Garfunkel.” Sure, the Billboard Music Awards are about what’s current, but you can’t love today’s hits without appreciating where they came from — even if the lyrics aren’t quite right.

In an interview on Billboard.com, Tracy explains, “When I was little, my father was a musician and vocalist, so there was always music playing in the household. I listen to classics a lot — it sparks nostalgia for me… But I’m also paying attention to people like Miguel, Taylor Swift, Jay-Z and Kanye West.”

Check out our review of Mariah Carey and Miguel’s new single, “#Beautiful” >>

OK, it has nothing to do with the Billboard Music Awards, but it’s hilarious.

Skip to 2:15 and you will hear how Tracy Morgan got kicked out of Prince’s purple palace one night after a party. So Prince is scheduled to appear on the Billboard Music Awards. Will Tracy confront Prince about their past altercation? Does Prince hold a grudge? If it comes to a fight, my money is on Tracy. Prince might be scrappy, but we’re talking Tracy Morgan here.

Neil Patrick Harris did it when he hosted the Tony Awards. Everyone who hosts the Oscars does it. And hopefully, we’ll see Tracy Morgan do it.

I’m talking about a song parody. In the clip above, Tracy sings “Call Simone,” a parody of Erykah Badu’s “Call Tyrone.” If you don’t know the song, watch Erykah’s first and then watch Tracy’s. It’s so good.

Personally, I’m keeping my fingers crossed for a Tracy Morgan parody of a Justin Bieber song.

Many of you don’t know that he played Nelson Mandela opposite Matt Damon in the 2009 movie about South African soccer, Invictus. Yup. He did. Oh, wait. That was Morgan Freeman? Never mind.

He is a veteran host

This isn’t Tracy’s first rodeo. He was the host of the Syfy channel’s hidden camera prank show called Scare Tactics. It was pretty much liked Punk’d but instead of a funny prank, this show does a scary prank. Let’s just hope nothing too scary happens at the Billboard Music Awards.

If something happens, Tracy Morgan can be replaced by Tina Fey, Alec Baldwin or any number of other comedians

Search for Tracy Morgan impressions on YouTube. There are a ton. So if, God forbid, something happens halfway though the show, there will be a suitable stand in waiting in the wings until Tracy has recovered. Some of these impressions are so good, we might not know Tracy was even gone!

The dude is funny!

Whether it’s his Saturday Night Live characters, his stand-ups or his interviews, Tracy Morgan is hilarious! One thing’s for certain — Tracy will bring the funny to the Billboard Music Awards!