You won’t believe the reason why Emma Watson is now Keeping up with the Kardashians. 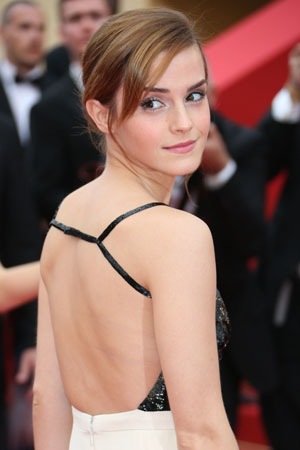 Emma Watson went method while preparing for her role as a rich robber in the upcoming movie The Bling Ring.

Did she live as her character, a la Daniel Day-Lewis? Kinda: She watched a lot of reality television to learn from the shows’ vapid stars.

“I watched a lot of Keeping up with the Kardashians and The Hills and I tried to understand the psychology of this kind of girl as much as possible,” the British actress told reporters Thursday at the Cannes Film Festival in Cannes, France.

“I didn’t want her to be just a parody. The accent was hard as it was a particular kind of dialect. I also thought a lot about what her parents must have been like.”

The Bling Ring is about a group of rich Calabasas, Calif., teens who stole from several celebrity homes — including Paris Hilton, Rachel Bilson, Orlando Bloom and Audrina Patridge — from 2008 to 2009. Part of the movie was even filmed at Hilton’s house, but Watson added that the movie really isn’t about the actual robberies.

“This really isn’t a heist movie,” she said. “It was how about these kids wanted to pretend for just two hours or so that they were actually Paris Hilton and living that life.”

It’s a big month for Watson: She’s the cover girl of the June/July issue of W magazine. Inside, the college student said that she’s more interested in being young than being hot.

“I’ve never wanted to grow up too fast. I wanted to wear a sports bra until I was 22!” she said. “The allure of being sexy never really held any excitement for me. I’ve never been in a terrible rush to be seen as a woman.”