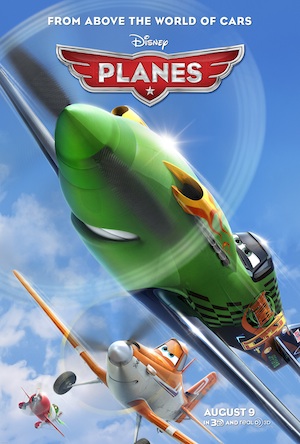 It’s not a car or a train — it’s a plane! Disney’s heading to the skies for its next animated adventure. Following in the footsteps of Cars and Cars 2 is Planes. It’s a 3D action comedy that takes place in the world of aviation.

The hidden gems in Brave, Up and other Disney-Pixar films >>

The film centers on Dusty (voiced by Dane Cook), a plane that yearns to be a high-flying air racer. Unfortunately, his fear of heights is keeping him grounded. He turns to a seasoned aviator to help him train and qualify for the race circuit. Doesn’t this plot sound vaguely familiar?

The cast of Cars 2 interview >>

Dusty plans to take on the race’s defending champ. But to do so, he has to test his limits and find the inspiration to soar.

With both Edwards and Kilmer in the film, who’s hoping for a Top Gun reference? Maybe this is the closest thing we’ll ever get to a reunion. Either way, we’ll take it.

The following video features music by the film’s composer, Mark Mancina. There’s no dialogue, just great visuals and an amazing score. It’s an interesting marketing approach that gets the job done.

What do you think of the new trailer for Planes?