Miley Cyrus has been coy about her engagement ring all spring, but she proudly wore it on the red carpet on Wednesday night at Maxim‘s Hot 100 party. 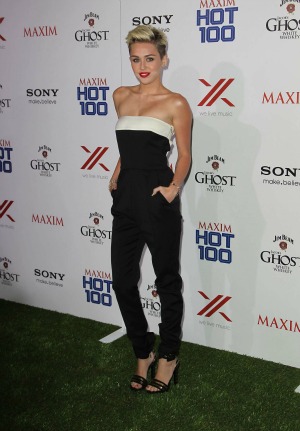 It’s sometimes hard to follow the on-again, off-again saga of Miley Cyrus‘ engagement ring. For those keeping track, though, it’s back on her finger.

At Maxim‘s Hot 100 party in Hollywood Wednesday night, all eyes were focused on the singer’s ring finger. Is it on or is it off?

Cyrus and her fiancé Liam Hemsworth have had a rough spring filled with separations, work commitments and rumors that the older Hemsworth brothers do not want their little bro to go through with the wedding. Last night’s appearance on the red carpet reassured her fans that all is well in the relationship for now.

While the former Hannah Montana star didn’t talk about her love life, she did share her excitement about her No. 1 spot on Maxim‘s list.

She told HollywoodLife.com, “My first reaction was to go straight to Twitter but I had to keep my paws off my phone. I think I announced it four days earlier by accident, but it was all because I was so excited.”

Cyrus even jokingly shared, “I had to keep my thumbs from pressing send.”

The child star finally revealed the news to her followers on May 3 via her Twitter page.

She wrote, “Didn’t know this was coming out yet. I’m so happy to be #1 on Maxims HOT 100! #myfanskickass #dreamsdocometrue.”

Along with the tweet was a sultry photo of “The Climb” singer dressed in a sexy gold bathing suit from her shoot with the magazine.

She wore a bit more on the red carpet as she donned her signature strapless jumpsuit by Valentino. The outfit showcased her buff arms and fit body.

Cyrus will next be seen as a presenter at Sunday’s Billboard Music Awards where she’s promising a big announcement to her fans.

She tweeted, “Makin a special announcement this weekend @billboard #tunein.”