The late Bea Arthur is probably rolling over in her grave right now: An oil painting inspired by her breasts just sold for millions at auction. 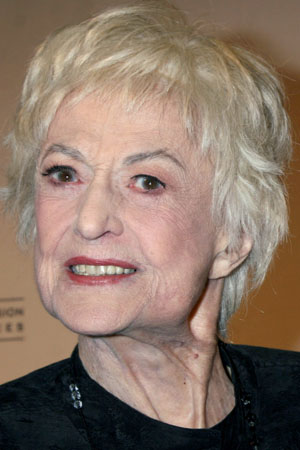 How much would you pay to have the breasts of late Golden Girls star Bea Arthur featured on your living room wall?

Try $1.9 million: that’s how much the oil painting — aptly titled Bea Arthur Naked — fetched at Christie’s auction house on Wednesday night. Artist John Currin came up with the masterpiece in 1991 after viewing a clothed photo of the actress.

Read on for more celeb gossip >>

“Beautiful in its execution, infamous in the press, and simultaneously nostalgic and repelling with its subject matter, Bea Arthur Naked is among John Currin’s early master works,” the auction house wrote on its website.

The winner better not post a picture of the win on Facebook, though: It could get him (or her) banned.

That’s what happened when editors for The Daily Beast posted a small thumbnail of the painting on the site’s Facebook page Wednesday. Editors were later locked out of both their personal and professional accounts for violating the social media network’s terms of service.

But, everything ended up fine: A quick call to Facebook headquarters cleared things up.

“Our policy prohibits photos of actual nude people, not paintings or sculptures,” a Facebook spokeswoman told writer Brian Ries. “Unfortunately, this image was erroneously removed under the same clause we use to prevent more graphic images from propagating on the site.”

“Occasionally, we make a mistake and block a piece of content we shouldn’t have.”

No word on what Betty White has to say about this.