Kanye’s next album is due out on June 18. He plans to tour thereafter. The mother of what will then be his brand-new baby would prefer otherwise. 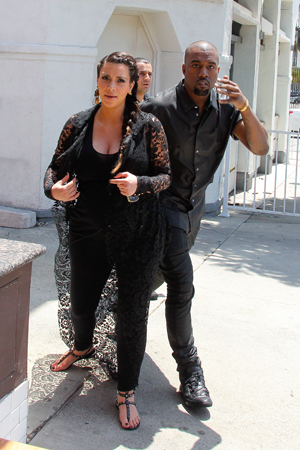 Kanye West reportedly plans to launch an ambitious world tour soon after the child he’s having with Kim Kardashian is born. And Kardashian is allegedly not happy about it.

“Kim is giving birth in July, and the baby will only be a few months old when Kanye goes out on the road,” a source told RadarOnline.

The rapper’s album is expected June 18. Kardashian and West’s baby will be out a few weeks later, and the tour would presumably take place in the late summer or fall, to support album sales.

“Needless to say,” the source went on to say, “Kim is very unhappy that Kanye won’t be around as much because of his work. Even if she flew on a private jet with the baby to see Kanye, it would be impossible for mother and baby to be on the road with him.”

Plus, Kardashian is kinda nailed to Los Angeles, filming with her family in for their reality show, Keeping Up With the Kardashians.

“Kim just feels like she can’t win. She feels that both of their work schedules are going to prevent them from spending quality time together after the baby is born,” the source told RadarOnline.

How Kim Kardashian wormed her way into the Met Gala >>

These latest rumors come only a couple of days after rumors swirled that Kardashian’s family is unhappy with the way West is treating Kim; i.e. he’s not being solicitous enough.

A friend of the family told gossip site NaughtyButNiceRob.com, “We just do not understand why she is traveling to Paris to see him. She is the pregnant one. Kayne will fly in to see the editors of Vogue but he won’t fly in to see the lady carrying his child. The only way they have a future is if Kim continues to do whatever he says.”