Tragedy struck in last week’s episode and someone discovered a very painful truth. How will everyone be affected as ABC’s hit drama goes into its first season finale? 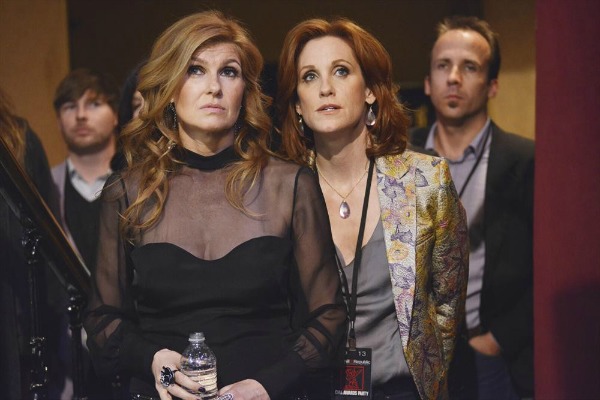 Warning: Major spoilers ahead for Nashville Episode 20, “A Picture from Life’s Other Side,” and slight spoilers for the season finale.

ABC sure pulled a fast one on all of us in that last episode. Spoilers and rumors had been flying for at least a week that two people were going to die in the finale, but instead of us having to wait another week to find out who was going to perish, they killed off both Dante and Jolene in Episode 20.

Add to that the fact that Maddie also discovered a paternity test that proved Teddy wasn’t her dad, and we’re talking about one major episode. After all that it’s a wonder there’s anything left to show in the finale, but judging by the synopsis and preview videos, there’s still plenty more to come.

Here is the official synopsis of the Nashville finale from ABC:

“I’ll Never Get Out of This World Alive” – A shadow has been cast over country music’s biggest night: Juliette discovers a letter from Jolene revealing her mother’s true feelings; Rayna and Deacon’s fairytale evening at the CMA Awards, even performing with Brad Paisley (who guest stars as himself) — may not end in a happily-ever-after; and Gunnar will do whatever it takes to win Scarlett’s heart back — but is it too late? Meanwhile the U.S. Attorney’s office is closing in on Teddy, and Peggy returns with a secret of her own, on the Season Finale of “Nashville,” Wednesday, May 22 (10:00-11:00 p.m., ET) on the ABC Television Network. Kimberly Williams-Paisley and Chris Carmack also guest star. Brad Paisley also guest stars as himself.

Here’s the preview video for the episode.

Here’s a sneak-peek clip from the episode.

From everything above, it looks like the show isn’t holding back on anything. Juliette is apparently going to go even more downhill, Deacon is going to find out that he’s Maddie’s father and apparently fall right off the wagon, things are going to come to a head with Gunnar and Will (who else thinks those two are going to end up kissing before the episode is over?) and Scarlett is apparently going to walk out on Gunnar. Plus Teddy and Deacon are going to have a knock-down drag-out fight over Maddie.

What do you think now that you’ve seen the synopsis and watched the preview and clip from next week’s Nashville finale? Got any theories on how things will end up with each of the characters?