The Abercrombie & Fitch “cool kids” controversy just got a little hotter now that Kirstie Alley has joined the fray. She isn’t too happy with the CEO’s comments. 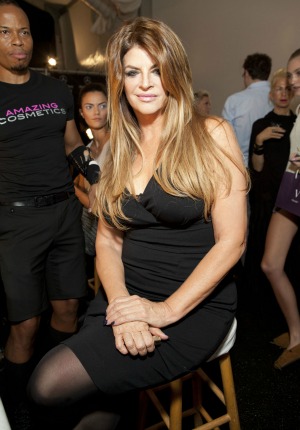 The heat on Abercrombie & Fitch is getting a little hotter now that Kirstie Alley has joined the fray. The actress is responding to CEO Mike Jeffries’ comments in a 2006 Salon interview that recently resurfaced.

In the interview he talked about the clothing brand being designed for an elite group.

Jeffries said, “We go after the cool kids. We go after the attractive all-American kid with a great attitude and a lot of friends. A lot of people don’t belong [in our clothes], and they can’t belong. Are we exclusionary? Absolutely.”

The former Dancing with the Stars contestant has publicly dealt with her own weight issues, so this topic is not foreign to her. She chimed in with her opinion in a recent interview with Entertainment Tonight.

Alley said, “He says, ‘Abercrombie clothes are for people that are cool and who look a certain way and are beautiful and who are thin and blah, blah, blah. He goes on and on and on. That would make me never buy anything from Abercrombie even if I was cool and thin.”

As a mom to two young adults, William, 20, and Lillie, 18, she had this to say about their future with the brand.

“I’ve got two kids in that demographic. But they will never walk in those doors because of his view of people … forget women, his view of just people.”

A&F to The Situation: We’ll pay you to stop wearing our clothes! >>

Even One Tree Hill actress Sophia Bush weighed in on the controversial comments via Twitter.

She wrote, “Such a letdown to see that Abercrombie, a company geared toward teens, lets their CEO speak like this.”

Others are taking the issue one step further. Filmmaker Greg Karber decided to help the company with a “brand readjustment” by creating a video and doing some charity work by handing out the clothing to the homeless in L.A. The video calls for consumers to clean out their A&F apparel out of their closets and donate it to the less fortunate.

No word on what A&F’s CEO thinks about this “cool” trend.

38 mins ago
by Kay Snowden