Captain America fans haven’t seen the last of Hayley Atwell. Her alter ego, Peggy Carter, will return for the sequel and her own mini-movie! We’ll see what Peggy was up to while Cap was on ice. 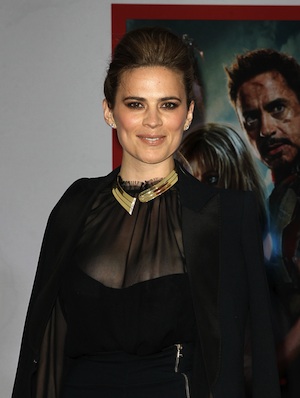 British actress Hayley Atwell is no stranger to the Marvel Universe. She was the female lead in 2011’s Captain America: The First Avenger. Atwell played Peggy Carter, the love interest to Chris Evans’ Steve Rogers.

Hayley Atwell on Chris Evans: ‘I couldn’t help myself’ >>

Marvel Studios is now shooting the film’s sequel, Captain America: The Winter Soldier. And Atwell will reprise her role for a few flashback scenes. Peggy and Steve’s love story began during World War II. He was considered dead after his plane went down in the ocean. Peggy moved on with her life, grew older and eventually died.

Meanwhile, Rogers was found frozen but alive decades later. Too bad his lady love isn’t around to see him. According to Atwell, Peggy will be at the center of her own movie. We’ll finally learn how she spent the rest of her days.

“Fans of the first film really wanted to find out what happened to Peggy afterwards, so Marvel are also making a short film, which is basically ‘What Peggy Did Next’, which will be shown at Comic-Con [the annual international pop culture convention held in San Diego] and be on the DVD extras of the second film,” Atwell tells The Big Issue.

“So as well as doing a bit in the new film, I’ve got a whole new spin-off short film. It has been great to be back in training with the stunt coordinators, kicking some butt again.”

If you can’t make it to San Diego to view the film, you’ll have to wait it out. Peggy’s one-off adventure won’t reappear until The Winter Solider hits DVD.