Jennifer Lopez isn’t completely closing the door on a return to the judges’ table on American Idol. If she has time in her schedule, she is a “maybe.” 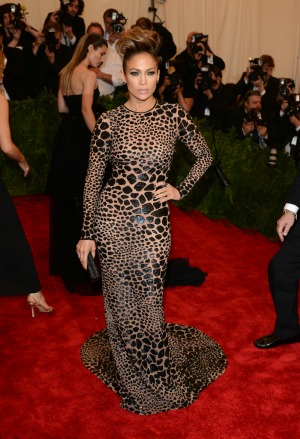 Even though this week is the last round for season 12 of American Idol, it is doubtful that many television viewers can name the final two contestants. That is because the drama of the revolving judges’ panel makes more headlines than the contestants these days.

In the last month, the show has seen more turmoil than any prior season, from the rumors of Jennifer Lopez replacing Mariah Carey midseason to the official news that Randy Jackson is leaving to Wednesday’s reports that Nicki Minaj is on her way out the door too.

Now, leave it to JLo to add one more story to the mix. The multi-talented performer was just named chief creative officer of NUVOtv, a Latin TV channel and she spoke at their upfront presentation on Wednesday in New York.

When Lopez was asked about coming back to the show, she replied, “I don’t know. That’s the question of the moment. I loved doing the show. I’ve said that over and over. If it came down to it and things were right and it worked out right — we have a lot going on right now. For an offer to come in and for me to consider it, I would have to sit down and look at my next year.”

Which 4 celebs could save American Idol? >>

She continued, “I’m just in the moment of what I’m doing right now. I don’t have any more time!”

It sounds like Lopez is leaving the door open for a return to the talent competition show. Even with room in her schedule, the producers would have to pay her a big salary to return. Given the dismal ratings this season, they might be looking for more affordable judges.

Harry Connick Jr. shared that he had been asked if he was interested in judging for season 13, but he also copped to a busy schedule. After all of the drama this season between Minaj and Carey, it’s no wonder it is a hard job to fill.

One confirmed Lopez sighting on AI will be on Thursday’s results show. The singer will be debuting her new single “Live It Up,” from her eighth studio album.