With the Season 2 finale of Grimm looming, we caught up with Bitsie Tulloch and got the inside scoop on what’s ahead for Juliette and the rest of the cast. Plus, she spills about her upcoming movie Parkland! 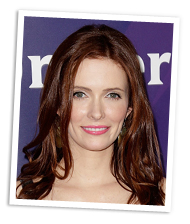 With the Season 2 finale of Grimm looming, we caught up with Bitsie Tulloch and got the inside scoop on what’s ahead for Juliette and the rest of the cast. Plus, she spills about her upcoming movie Parkland!

SK: What can you tell us about the finale? Give us some teasers!

Bitsie Tulloch: It is a two-parter, so you’ll see a continuation of Episode 21, “The Waking Dead,” with the zombies. As you can imagine, being the season finale it does end on a cliff-hanger, and the biggest teaser I can give you is that at the end of the episode it’s questionable as to whether or not one of the series regulars is dead or alive.

SK: How will Juliette’s story affect what’s happening to Nick and everyone else?

BT: I think the most important aspect is that Juliette finally being let in on the secret is not only a huge weight off Nick’s shoulders (after all, he’s spent the better part of two seasons having to hide it from her), but also potentially a huge help. Remember, prior to Nick finding out he’s a Grimm and his whole world changing, the two of them had been dating for years and really knew and loved each other. So assuming Juliette’s memory returns, then she’s going to be familiar with aspects of his character that maybe the others haven’t yet learned. Plus, she’s a veterinarian and I’m sure that will come in handy with some of the Wesen!

SK: What’s it been like this season playing Juliette, with her memory gone and slowly returning?

BT: It’s been really fun to play someone with amnesia who is losing their mind. It was certainly tough emotionally, though, so I’m glad Juliette is putting the puzzle back together. I really just tried to play the honesty of that situation — waking up from a coma and not remembering someone everyone is telling you you loved deeply. It felt like someone was playing a cruel trick on her — walking into her home and seeing photographs of her and a complete stranger all over the place.

SK: How do you feel about her falling back in love with Nick?

BT: I’m really happy. They really loved each other and were in a very stable place before Nick found out he was a Grimm, and unfortunately they both have had major obstacles thrown at them, but the fact that they seem to be finding each other in the midst of all the rubble speaks volumes. If you can’t believe in a happy ending then what’s the point?

SK: Do you think Juliette will ever be a part of Nick’s little “Scooby Gang” and maybe even start helping with cases?

BT: I certainly hope so! Who knows how smoothly that transition would go, but Juliette definitely has a lot to add to the gang both as a veterinarian and also being the one “normal” one. She’s the only character who is not a Wesen or a cop and I think that has its advantages. I think it would be exciting to have her get in on the action.

SK: Is Juliette completely over Renard?

BT: For now, yes. That was completely a potion-induced “lust affair” that was very harmful both emotionally and physically to both of them. I’m sure they’re both relieved it’s over. That said, never say never!

SK: How do you think she would feel if it turned out that Adalind’s baby was his?

BT: I think for now Juliette wouldn’t care, considering she isn’t interested in Renard anymore. I don’t think you’ve seen the last of Juliette interacting with Adalind, though! Eventually she’s probably going to piece together everything that happened with Adalind and the cat scratch. I smell a cat fight… Meow, pfft pfft!

SK: Let’s talk about you a bit! You’ve lived in Spain, Uruguay, Argentina and the U.S.! Which country did you like the most? Do you ever want to move back to one of the countries you lived in previously?

BT: I loved all three countries! They all have pretty different characters. I remember Argentina the best because that’s the last country I lived in before moving to the States, and it was super-fun. I love red meat and it doesn’t get much better than that! Uruguay I have a special fondness for because we moved there when I was 3, and so my first memories are all of Uruguay — playing on the beach in Punta Del Este, etc. We traveled a bunch in South America the six years we were there but I have never been to Brazil, so that’s on my list. As an adult, Spain has become my favorite country — I go there about once every two years to visit — but I don’t remember living there because I was so young. My mom’s side is Spanish and it always feels like home among Spaniards. I really love the Spanish culture. Plus I always need to practice my Spanish, and the best way to do that is really immerse yourself.

SK: You just wrapped the filming of Parkland with Paul Giamatti, Billy Bob Thornton and Zac Efron. How was it working with them?

BT: Incredible! The script by Peter Landesman, who also made his feature debut as a director, was one of the best scripts I’ve ever read. The entire process was very intense and very emotional given that the film is basically about the three days after JFK’s assassination in 1963. Since all the characters are based on real people, and JFK is such an icon, there was definitely a lot of pressure to honor his life and death. Paul Giamatti was just wonderful — not only is he supremely talented but he’s also incredibly kind and down-to-earth. The cast also includes Jacki Weaver, Marcia Gay Harden, Jackie Earle Haley, James Badge Dale, etc. I’m very honored to have been a part of the film.

SK: Are you working on any other projects you’d like our readers to know about?

BT: Yes, definitely either Netflix or VOD the film David Giuntoli and I did together before Grimm called Caroline and Jackie. We play boyfriend/girlfriend in that film too but it is a very different dynamic from Grimm‘s. I think it will be fun for the fans to see us playing such different roles. It’s an independent film about two sisters and a dinner party gone wrong, and Giuntoli is excellent in the movie.

Other shows we love