Singing with a rasp all those years really did a number on Rod Stewart’s voice — and other parts of his body. 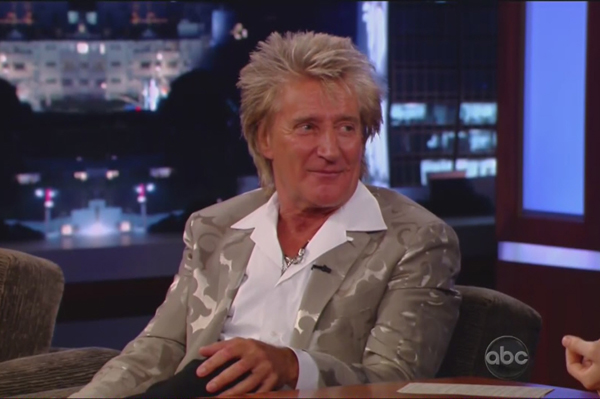 Some guys have all the luck. Others have shriveled private parts.

Rod Stewart revealed in an interview with Mojo Magazine that he was addicted to steroids in the ’80s, and that his habit had some really awful side effects.

“In those days we didn’t have in-ear monitors and the band kept getting louder and drunker and I kept blowing my voice out,” the 68-year-old rock star, who’s been in the music business for five decades, told Mojo.

So, since he wanted to remain on the stage, he treated his wrecked voice with steroids.

“The steroids will take down the swelling in any membrane,” he said, noting that includes what the British call a man’s “rig.” But “it’s what you do when you’re in a bit of a pinch and need to do a show and you can’t sing.”

He could sing, but he couldn’t do much else. Stewart now calls steroids “the most horrible drugs in the world.”

“Steroids make you fat and bloated, you can’t sleep and you get really irritable,” he said.

Stewart even said that one night he had a hallucination while on stage: “I thought I was in the kitchen with my mum because the steroids had eaten a hole in my stomach. I was bleeding internally and hallucinating. What the audience must have thought!”

Incredibly, even though Stewart now knows the full extent of the side effects of steroids, he still uses them once a year or so to get through tough periods.

“I will still use them around once a year if I’m really struggling,” he said. “It gets you through the show, but you pay for it. You can’t sing for a week.”

Wow! That is some celebrity revelation. Of course, Stewart has shown himself to be extremely frank before. In his 2012 tell-all autobiography, he wrote that he and former bandmate Ronnie Wood used to do cocaine by putting it in suppositories that they used rectally.

He also addressed the famous rumor that he had to get his stomach pumped after ingesting too much semen. No truth to that, he said.