LL Cool J’s last studio album was released five years ago. Now, the NCIS: Los Angeles star is back in front of the mike with his smooth lyrical style on his new album, Authentic. 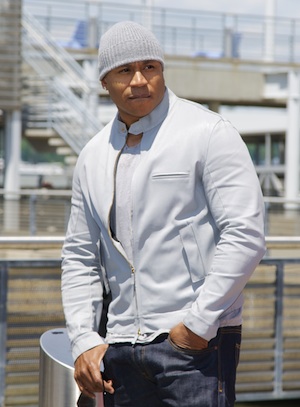 You can’t really blame LL Cool J for putting his rap career on hold for a bit.

Cool J didn’t have time for music. He has been busy beating down burglars, hosting the Grammys, and playing ex-Navy SEAL and Special Agent Sam Hanna on NCIS: Los Angeles.

NCIS: LA renewed for another season >>

But now he is back with his new album titled Authentic.

In an interview with National Public Radio, LL explained the title: “The last thing that I want to do is be a hack — someone who is adapting to whatever the current trend is, and manipulating the public into being on board with me even though, from an artistic standpoint, I’m not doing anything.”

On Authentic, it’s not that LL Cool J isn’t artistically doing anything. In fact, it seems that on this album he may be doing too much.

It also seems that for his new independently released album, LL Cool J decided to call every single person he knew and have them guest star on the album. As a result, Authentic has more stars then Los Angeles itself.

Fitz and The Tantrums contribute a melodic refrain to the moody love song “Not Leaving You Tonight.”

In the track “We’re the Greatest,” Cool J’s rapping pretty much takes a back seat to the track’s contributions from guitarist Eddie Van Halen and Blink-182 drummer Travis Barker.

Snoop Dogg, Travis Barker, and funk legend Bootsy Collins once again overshadow LL on “Bartender Please,” which in theory should have been a great collaboration. However, with all of those artists together on one track, everything just ends up sounding like they’ve all had one too many.

His latest single, “Live for You” features Cool J’s “Accidental Racist” buddy Brad Paisley. This track is certainly more hip-hop than country and one of the more successful songs on the album.

LL Cool J, a self-given moniker which stands for “Ladies Love Cool James,” is always at his best with his love songs, and the love songs are certainly the stand-outs on this album. However, once he starts adding guest stars to his tracks, the songs get messy and — because of the numerous guest stars — end up bordering on gimmicky.

In all of the commotion of his guest stars, LL Cool J seems to have lost a lot of his “Mama Said Knock You Out” swagger. His sensitive side is there, but in this album, his rap bravado just doesn’t come across as — what’s the word I’m looking for here — authentic.

Authentic is available now in stores and on iTunes.

Listen to LL Cool J’s “Live For You” featuring Brad Paisley and tell us what you think in the comments below.