Just three weeks after Holly Madison gave birth to a new daughter, her other half showed up in court on charges that may land him in prison for more than 13 years. 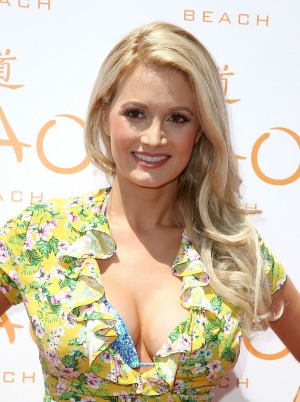 Just a day after Holly Madison announced a wedding date to fiancé Pasquale Rotella, word spread that he might be going away for a while.

Holly Madison: “I was actually laughing as I was pushing!” >>

RadarOnline.com is reporting that Rotella might be facing up to 13 years in prison for “bribery, embezzlement, conspiracy and conflict of interest”. Rotella attended a pretrial conference on Monday, May 13.

“The LA Country District Attorney alleges that Rotella used more than $2.5 million in funds from the Los Angeles Memorial Coliseum to pay off city officials,” said Us Weekly. “According to Radar, Rotella would use the coliseum to host raves.”

Rotella was indicted, along with five others, and was released on $1.8 million bail.

“[Rotella] has always acted lawfully and appropriately with respect to all of his dealings with the Los Angeles Memorial Coliseum,” his attorney Gary Jay Kaufman told Radar. “Any allegations of wrongdoing on the part of Mr. Rotella by the District Attorney’s office are completely baseless and flat-out wrong, both on the law and on the facts.”

Kaufman went on to say he believes the charges are only an attempt to gain publicity.

“All transactions between Insomniac and the Coliseum were transparent and approved by the Coliseum General Manager, his staff, and the attorneys representing the Coliseum,” he added. “Any charges against Mr. Rotella are clearly politically motivated and publicity driven.”

Rotella and Madison had a baby girl, Rainbow, only three months ago, and recently announced they will be getting married on Aug. 14. Madison is focusing on her baby and her wedding and is keeping a brave public face in light of Rotella’s legal troubles.

“For her part, the former Girls Next Door star doesn’t seem too fazed by her soon-to-be-hubby’s legal troubles,” said Us Weekly. “On Tuesday, May 14, she tweeted to a new post on her Celebuzz blog page, writing about how important baby socks are needed for new moms.”

Rotella is due back in court July 29.