Rachel McAdams is up to her old tricks. This November she’ll star in About Time, a film where she once again falls for a lovelorn time-traveler. 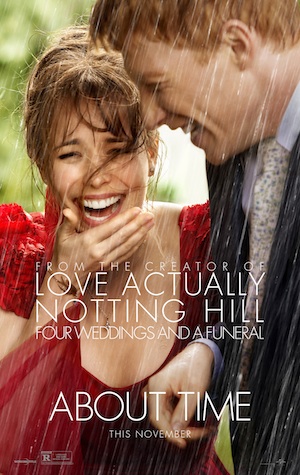 Rachel McAdams really has a thing for time travel, doesn’t she? Four years after starring in The Time Traveler’s Wife, she’s taken on About Time. Like the previous film, it centers on a man who can bounce between past and present.

Unlike The Time Traveler’s Wife, this movie is a romantic comedy — not a drama. It takes a humorous look at what happens when you can relive any moment and make it perfect.

The person in question is Tim Lake (Domhnall Gleeson). He learns that the men in his family have the gift of time travel. Tim immediately takes advantage of his ability and uses it to get a girlfriend. Cue McAdams’ Mary. The duo meet, then un-meet, meet again and eventually stay together.

Unfortunately, time travel isn’t all it’s cracked up to be. You can’t stop or change everything. It’s a power that has limits and Tim learns that the hard way. About Time is written and directed by Richard Curtis, who’s worked on some of the best rom-coms of all time.

The cast for About Time includes Bill Nighy, Tom Hollander and Margot Robbie.

About Time opens in select theaters Nov. 1 and nationwide Nov. 8.