Zoe Saldana is naked as a jaybird in this month’s Allure, and still more alluring for the star’s lesbian and bisexual fans, she signals her interest in other women. 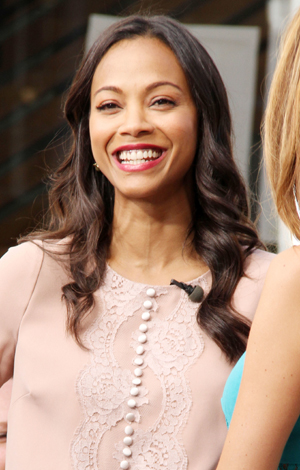 Zoe Saldana famously dated Bradley Cooper, but she says she may not end up married to a dude.

She might “end up with a woman raising my children,” the star, who describes herself as “androgynous,” told Allure in its June issue.

The magazine features the Star Trek Into Darkness star on its cover in a spaghetti-strap black tank top. But inside the magazine, she ditched the tank top — and everything else, posing naked with much sleek belly and side-boobage exposed.

Hey girl: Bradley Cooper is single thanks to Zoe Saldana >>

Has she been with another woman? She paused before answering, then said “Promise me one thing: You’re going to ask this question — if you choose to, just put three dots as my response. That’s it.”

So that means… what? It’s not no, right?

Anyhoo, Saldana says she’d be ready to settle down with a woman: “Yes, I was raised that open.”

Zoe Saldana loves being on top >>

Saldana also talked to Allure about the recent criticism that she is too light-skinned to play the role of Nina Simone in the upcoming biopic about the singer. “Let me tell you, if Elizabeth Taylor can be Cleopatra, I can be Nina,” she said. “It doesn’t matter how much backlash I will get for it.”

One thing she’s not up for: dating more actors. She had a 12-year relationship with an entrepreneur, but then burned through Bradley Cooper in about a year.

“Been there, done that, got the T-shirt,” she says of hooking up with actors.