Bill Hader has been a mainstay on SNL for the past eight years, but announced that his last episode will be Saturday’s season finale. So what will he do next? 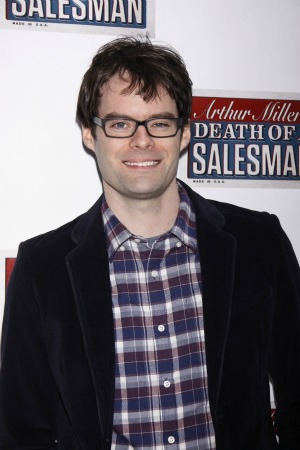 After eight seasons, Bill Hader is now one of the most senior cast members of Saturday Night Live. But he announced Tuesday that he plans to leave the show after this year’s season finale.

“It was a hard decision, but it has to happen at some point,” Hader told the New York Times. “It got to a point where I said, ‘Maybe it’s just time to go.'”

The comedian very recently brought in what may be his most lovable character, Stefon, the Weekend Update’s “New York City correspondent.” He has also become known for his impressions of various celebs.

“In terms of intelligence and talent, he was in that same tradition,” Lorne Michaels said, according to Jon Blistein with Rolling Stone. “He was so completely committed to the art of it and enough a student of it that there’s something strikingly original. He didn’t explode onto the air, but gradually he found his voice, and that became a huge thing.”

Hugh Grant and 9 other celebs banned from talk shows >>

Hader was nominated for an Emmy for his part on SNL last year, something very few cast members of the show have been able to say. He said he began to think about leaving after Kristen Wiig and Andy Samberg left after last season, but that isn’t the only reason.

“He plans to move his family to Los Angeles,” Blistein said. “Just this past season, Hader (who’s been in movies including Superbad and Men In Black 3) juggled SNL as well as three live-action and four animated movies. His wife, Maggie Carey, saw her own film career ramping up with the upcoming comedy The To Do List, which she wrote and directed, and which Hader appears in.”

It looks like Hader is the only cast member (so far) who has announced his departure after this season. Seth Meyers will be leaving when he takes over Late Night from Jimmy Fallon, but that isn’t set to happen until after next year.

Two cast members who have long been in question are Fred Armisen and Jason Sudeikis, who (believe it or not) are still on the show. But neither has mentioned leaving any time soon.

Hader’s last episode will be the season finale of SNL this weekend, May 18.