Katy Perry’s Jagger moment over the weekend sent the pop star into gyrate-mode. Watch her sing with the Rolling Stones, and tweet to the grammar patrol! 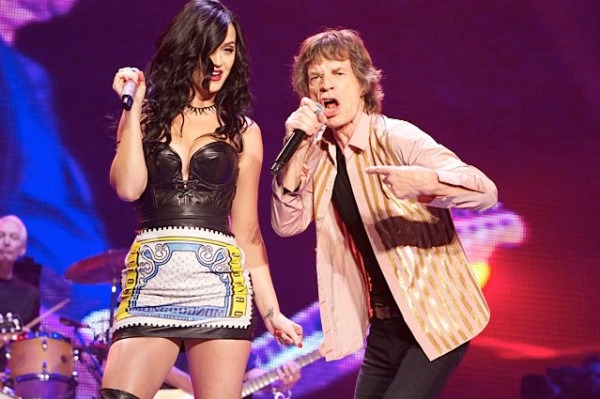 Katy Perry and Mick Jagger are a match made in music heaven — at least, according to her. Tangibly excited about having sung with the Rolling Stones, the single pop star took to Twitter Sunday to share this photo, writing, “Mick & Kate forever!”

Lending her vocal talents to “Beast of Burden,” Katy Perry took the stage in Las Vegas on Saturday night wearing thigh-high boots and a black bustier. Just before her big moment, the pretty, pretty girl tweeted to followers, “I’m much obliged & quite honored!RT @RollingStones: Tonight the Rolling Stones will be joined on stage in Las Vegas by @katyperry!”

Post-performance she boasted of her moment with the guy notorious for loving the ladies, “Yes, I just did gyrated on Mick Jagger. WHAT?! #Stones50.”

Typing a little too fast for the grammar police, Katy Perry wrote back to one person who called her misuse of words appalling, “I noticed that. I guess I was too excited. Sorry mom.”

The morning after, Katy Perry’s excitement had yet to die down. She wrote Sunday, “Thanks for letting me be the 5th wheel last night! @TheRollingStones.”

Perhaps the performance will make it into that autobiography the 28-year-old has signed on to write? (Here’s hoping she has a good editor lined up to keep the Twitter typo police away!)

Check out video of Katy Perry and the Rolling Stones’ “Beast of Burden” here:

What do you think of Katy Perry’s Jagger-gyrating and performance?