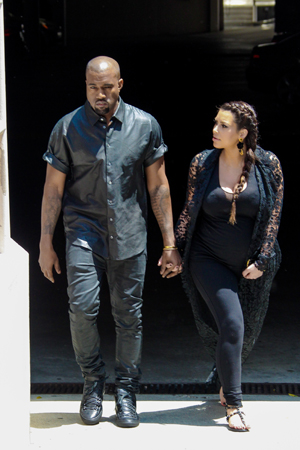 Kim Kardashian‘s not the only one with a bump now: Kanye West is nursing an owie after a mishap involving paparazzi on Friday.

West and Kardashian were walking in Beverly Hills Friday (hand-in-hand, says the New York Daily News: cute!) when the rapper accidentally smacked his head into a metal sign while trying to avoid photographers.

How Kim Kardashian wormed her way into the Met Gala >>

It apparently made a loud noise that prompted several of the shutterbugs to gasp and ask, “You okay?” in a video posted on TMZ.com.

West rubbed his head as Kardashian started clucking over him. Guess it hurt: He yelled “Stop f***ing taking pictures!” at one of the camera-wielders.

Hard to blame him. When you have a hurt head, it’d be hard to ignore someone standing and snapping images a few feet away.

Kardashian wisely urged West into a restaurant to calm him down, but apparently West wasn’t quite done yet.

“I just got here, man,” said the cameraman.

“Don’t take no photos. Stop it! All of you motherf***ers, stop it!” West commanded.

The fracas apparently ended there. Good thing, too, because certainly West didn’t want a repeat of the 2008 incident in which he and his bodyguard smashed the cameras of two photographers at LAX.

The pair was charged with vandalism, battery and grand theft. The case was eventually dismissed, but West and his cohort both had to do 50 hours of community service.