We don’t have to wait much longer to “meet” the firstborn child of Kate Middleton and Prince William: The due date was reportedly revealed — and it’s closer than you probably think! 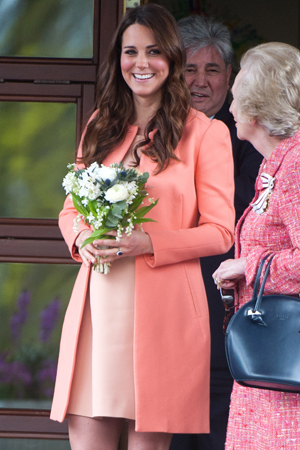 Still trying to figure out what to get Kate Middleton for her baby shower? You’d better hurry: She’s reportedly due in mid-July.

“Some of William’s closest pals were at a barbecue hosted by a family friend of the Royals recently,” a family “friend” told the U.K. Daily Mail over the weekend. “They were all discussing the fact that Kate’s baby is due to be born on July 13.”

Get a text message when the royal baby arrives! >>

That’s only two months away!

According to the source, Middleton will have the baby in the private Lindo Wing of St. Mary’s Hospital in Paddington. The luxe hospital just so happens to be the same place dear ol’ dad — Prince William — was born in June 1982. Gynecologists Alan Farthing and Marcus Setchell are reportedly on tap to perform the delivery, according to the Daily Mail.

But the expected due date might throw a wrench in some plans — specifically, the Coronation Festival, a four-day festival scheduled from July 11-14 to celebrate Queen Elizabeth II’s 60 years on the throne.

It might not be the best timing, but we’re sure Queen Elizabeth understands. Or, she’d better — it’s her great-grandchild, after all.

A Buckingham Palace spokesman refused to confirm or deny the due-date rumors.

“We have only said that the Duchess is due in July. Anything further would be speculation.”

Now, the only thing we need to know is the gender of the royal baby. Watchers have speculated that she’s expecting a girl — especially after she made some peculiar comments earlier this year — but the current word on the street is that it’s a boy, thanks to Uncle Prince Harry’s loose lips.

“He said the whole family were excited about it,” a source said of Prince Harry’s accidental reveal last month. “Apparently Kate has always wanted a boy. The close inner circle all know that it’s a boy and they’re busily buying gifts with a boy theme. There will be an awful lot of blue in their house.”

Naturally, there isn’t a confirmation that either. But we won’t have to wait much longer to find out for sure!