Savannah Guthrie had the day of a lifetime. Not only did she announce her new engagement, but movie star Bradley Cooper brought her flowers. 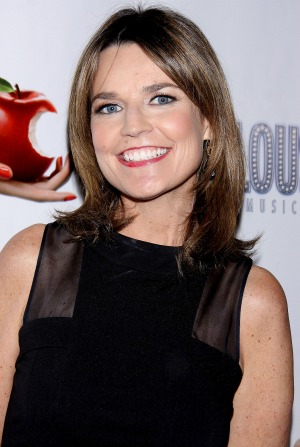 Savannah Guthrie is having a good year. Not only did she win the job of a lifetime less than a year ago, as the co-host on the Today Show, but she announced Monday that she is getting married!

Guthrie announced live on-air on Today that she was engaged over Mother’s Day Weekend.

“I got engaged over the weekend to my boyfriend … who I adore,” she said.

According to the New York Daily News, Guthrie’s new fiancé is Michael Feldman, a public relations consultant and former adviser to Al Gore.

“We’ve been together for four years so, as he said, no one will accuse us of rushing in to anything,” she said.

Will Anderson Cooper be the new Matt Lauer on Today? >>

Guthrie didn’t break the news right away, but instead thought people might see the ring on their own.

“I just came in wearing this ring, hoping one of my colleagues would notice,” Guthrie said, according to USA Today. “And no one noticed!”

Her co-hosts again chimed in with their thoughts on the engagement.

“Good for you and congratulations to Mr. Feldman,” Matt Lauer said. “He’s a great guy.”

Al Roker had a better idea though, and said, “Today throws a wedding!”

“Don’t even think about it,” said Guthrie, who said she wouldn’t consider having her wedding on-air.

The 41-year-old Today Show co-host was married from 2005 to 2009 to BBC’s Mark Orchard. The couple have not yet announced a date for their upcoming wedding.