Chris Brown’s neighbors are no fan of the singer. Or, at least, of the artwork he has painted on the curb of his Hollywood home. 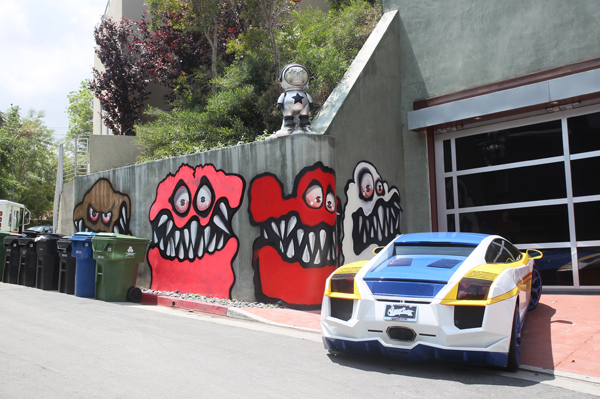 We hate your art. That’s what Chris Brown‘s neighbors are telling the singer, via complaints to the city of Los Angeles.

Brown, who owns a home in Hollywood Hills, had a series of bleary-eyed, shark-toothed goblins painted on a retaining wall abutting his house, and his neighbors aren’t fans.

“There are lots of babies, lots of children, and they’re literally frightened. It’s like devils on the wall — big scary eyes and big scary teeth, and just the whole vibe is not what we’re used to,” Patti Negri, president of the Hollywood Dell Civic Association, told the Los Angeles Times.

The neighbors complained to the city of Los Angeles that Brown’s sidewalk art is counter to local codes, which prohibit murals on most private properties.

The city agreed with the neighbors, and fined Brown $376 for “excessive signage,” and demanded he remove the toothy figures within 30 days.

He says the neighbors are harassing Brown, and noted that they’ve called animal control on the singer and complained about those parking near his house.

“They are trying to suspend the First Amendment,” Geragos said.

For her part, Negri told the Associated Press that she just wishes Brown would “tone it down and be a better neighbor.”

“I know a $300 fine is probably pocket change,” Negri told the Los Angeles Times. “But hopefully and maybe, he’ll just see the light and decide to be a good neighbor. We’re happy to have him — if he just tones it down.”

Say, maybe Brown should move next door to James Franco, who’s been weathering his own neighbor-complaints.