The iconic newswoman does more in a week than many people do in a year, but she has finally decided she can pass the reins to the next generation. 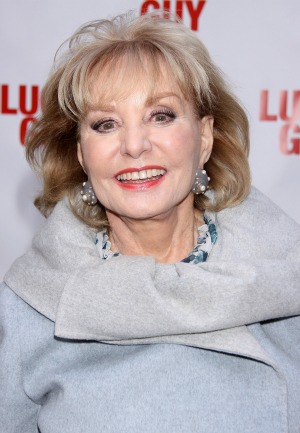 After months of speculation, Barbara Walters has made it official: She will retire next year. The journalist and producer, who has been with ABC for 37 years, will make the announcement on her show The View on Monday, May 13.

Barbara Walters special: How, exactly, is that fascinating? >>

“Until [summer 2014], she will continue to anchor and report for ABC News, appear on The View, and anchor specials throughout the year including a 20 years of 10 Most Fascinating People special in December, an Oscars special and a May career retrospective,” according to ABC News.

Walters will also continue to be the executive producer of The View.

“I am very happy with my decision and look forward to a wonderful and special year ahead both on The View and with ABC News,” she said. “I created The View and am delighted it will last beyond my leaving it.”

Walters started in journalism in 1961 on the Today Show on NBC, where she eventually became a co-host. But it was not exactly the path she had imagined for herself.

“No one was more surprised than I,” she told ABC of becoming an on-air journalist. “I wasn’t beautiful, like many of the women on the program before me, [and] I had trouble pronouncing my r‘s. I still do!”

Fifteen years later, Walters was hired at ABC’s Evening News, and she later became the co-host of 20/20. She also hosts a Most Fascinating People special every December. But of all her accomplishments, the journalist said she may be most proud of The View.

“There’s only one Barbara Walters,” ABC News president Ben Sherwood said. “And we look forward to making her final year on television as remarkable, path-breaking and news-making as Barbara herself. Barbara will always have a home at ABC News, and we look forward to a year befitting her brilliant career, filled with exclusive interviews, great adventures and indelible memories.”

As for her dreams when she retires, she is hoping to enjoy her time a little differently than many other retirees.

“I do not want to appear on another program or climb another mountain,” she said. “I want instead to sit in a sunny field and admire the very gifted women — and OK, some men too — who will be taking my place.”