Seth Meyers is going from “Weekend Update” to “Day’s End Update.” Is late night the best place for Meyers? 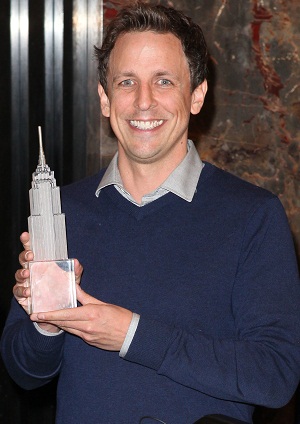 It’s official! After weeks of speculation about who will take Jimmy Fallon’s place on Late Night once he takes over for Jay Leno on the Tonight Show, NBC has finally made the announcement. Saturday Night Live‘s Weekend Updater, Seth Meyers, will succeed Fallon behind the Late Night desk.

The chair of NBC Entertainment, Bob Greenblatt, made the official announcement:

“We think Seth is one of the brightest, most insightful comedy writers and performers of his generation. His years at SNL‘s “Weekend Update” desk, not to mention being head writer of the show for many seasons, helped him hone a topical brand of comedy that is perfect for the Late Night franchise.”

Meyers is only 39, but he’s haunted the set of Saturday Night Live for over a decade already. He’s worked on SNL for 12 seasons, including eight as head writer and seven as the host of “Weekend Update.” Just like Meyers, Fallon saw major success on SNL before taking over Late Night when Conan O’Brien left. Before the Conan/Leno shake-up, O’Brien had spent 16 years hosting Late Night, and he, too, had paid his dues working for Lorne Michaels on Saturday Night Live. Michaels will run the Seth Meyers–hosted version of Late Night, as well.

No official date for Meyers’ takeover has been announced, but Fallon is set to move to the Tonight Show in February 2014, so Meyers’ switch should take place around then, as well.

Once Meyers exits Saturday Night Live, who are you hoping will take over “Weekend Update”?

53 mins ago
by Kay Snowden