Mike Tyson has always been eccentric, but now he’s a straight-up cartoon. The boxer has joined forces with Cartoon Network for his own show, Mike Tyson Mysteries. 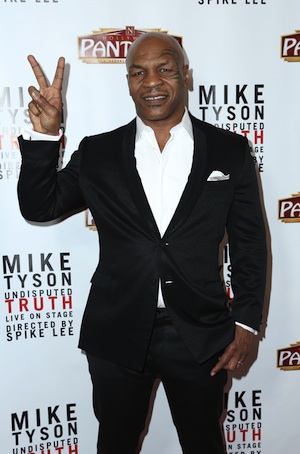 All this week, TV brass have been announcing their new program schedules for 2013–14. This year, we’ve seen some interesting pilots from unexpected talents — but none as surprising as Cartoon Network’s upcoming Mike Tyson Mysteries.

Yes, the title refers to former champion boxer Mike Tyson. It’s no secret that Tyson’s ventured into film and theater; the athlete-turned-actor can currently be seen in Scary Movie 5. Now he’s tackling animation. His new show will air during the network’s Adult Swim programming block.

“Armed with a magical tattoo on his face and a trusty associate by his side — a talking pigeon — if you have a problem that needs solving, Iron Mike is in your corner. The series incorporates live-action appearances featuring Mighty Mike himself, and the gloves come off as the former heavyweight champ and his fowl-mouthed partner gear up for weekly adventures as they put unsolved mysteries — like how to defeat a super computer at chess or why a famous author/werewolf can’t finish his novel — down for the count.”

Tyson will voice himself in the series, produced by Warner Bros. Animation. It may seem strange, but he’s not the first person to get his own cartoon series. Jackie Chan had The Jackie Chan Adventures (2000–2005), and at the height of MC Hammer’s career, he had Hammerman (1991–1992). It looks like Tyson’s joining an interesting bunch.

Will you tune in to Tyson’s animated debut?