90210 star Shenae Grimes went with a nontraditional wedding by rocking a black Vera Wang wedding gown while walking down the aisle to house music. 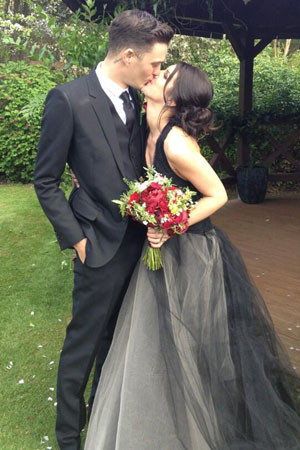 When a woman gets married, she worries about having “something old, something new, something borrowed, something blue.” For 90210 star Shenae Grimes, it was actually something black that finished off that timeless wedding phrase.

The nontraditional gown was revealed on the actress’ Twitter account when she wrote, “I now pronounce us Mr. and Mrs. Beech! Ahhh! Xx,” along with a photo.

Inside the Honey Boo Boo wedding: Hunting knives and BBQ! >>

A source told Us Weekly that the Canadian actress walked down the aisle to house music in a ceremony that took place at a countryside manor in England. The intimate ceremony was exactly what the couple wanted.

The details on the dress have also been revealed. The ball gown, which retails for $4,900, has a dramatic V-neck halter in the front with Chantilly lace appliqué attached to a tulle skirt. The back of the dress reveals a little more skin with an open back enhanced by the lace.

Grimes did add a little color to the ensemble by carrying a stunning bouquet of red roses, the perfect complement to a surprising wedding fashion choice.

The couple got engaged in December after a short courtship. The 23-year-old is finishing her five-season run on the CW show next week, while her new husband continues to model and pursue his music career.