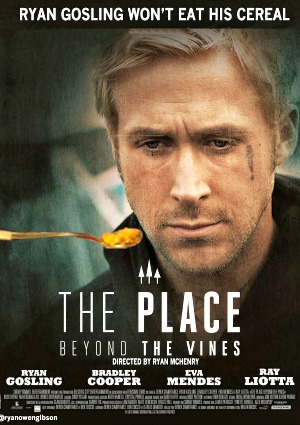 “I was watching Drive and eating cereal one day, and it kind of looked like Ryan Gosling was staring at my cereal,” Ryan McHenry told PopWatch of how the idea to mix breakfast food with Ryan Gosling came about.

Speaking of the skyrocketing popularity of his handiwork, the Scottish director shared, “It’s been really crazy, especially today now that the whole world seems to be watching them. Part one and two were liked by friends but part three made it to the popular page on Vine, that’s when my followers jumped from eight to 180.”

“Then every video I released afterwards made the popular page and began building towards 10,000 followers. I’m just really happy that people around the world are laughing at them.”

Fans are not only laughing, they’re starting to play along! McHenry’s work inspired another Twitter user to create the movie poster for Ryan Gosling won’t eat his cereal seen here.

Wonder if Eva Mendes can get this stubborn hunk to eat his breakfast?