Paris Jackson is having trouble at home with grandmother and guardian Katherine Jackson, sources say, and she’s considering a big move. 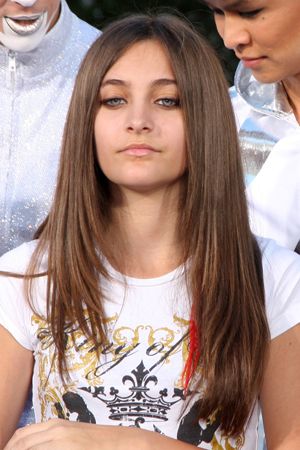 Grandma’s a big drag! That’s what sources are reporting Paris Jackson has in mind: And she’s mulling over a move for that very reason.

Paris Jackson, 15, the daughter of late singer Michael Jackson, has been photographed recently spending time with Debbie Rowe, the woman once married to Michael and who bore two of his children.

There’s a reason why, a source tells CelebrityFix: She’s planning to move back in with her birth mom.

“There has been a string of turbulent rows in the Jackson home over the past few weeks and it’s all coming to a head,” the source said.

At 15, Jackson is a little rebellious and wants her freedom. “Whilst she loves her grandmother Katherine, Paris thinks she has some extremely old-fashioned beliefs,” the source said.

What those beliefs are, who knows. But Paris, “an extremely independent young woman,” is starting to argue with her grandmother, and it’s causing friction.

Meanwhile, Paris has been spending more time with Rowe, whom she grew up without (Rowe and Michael Jackson divorced in 1999 and the singer was awarded sole custody while Rowe got a big pile of money for relinquishing her rights).

She was photographed hanging out with her mom on her own birthday, on the eve of Michael’s wrongful death trial against AEG Live, and most recently, last weekend in Palmdale, California, according to TMZ. The kicker? Last weekend was Katherine Jackson’s birthday.