Watching them make out on CW’s The Vampire Diaries had an extra zing when you knew they were sitting on the loveseat behind the scenes. Alas, this gorgeous couple is no more. 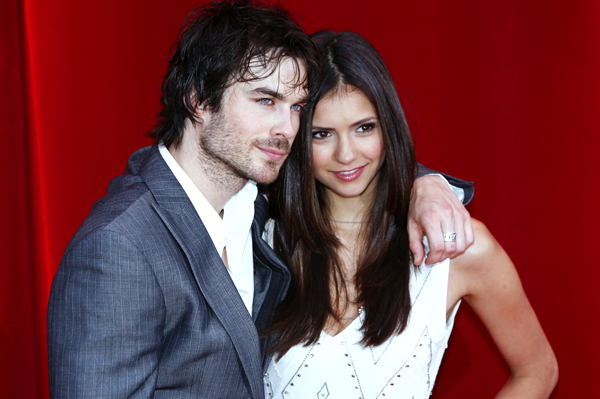 Rob Pattinson and Kristen Stewart will have to settle for being the Cutest Vampire Couple: co-stars and former main flames Ian Somerhalder and Nina Dobrev have broken up.

Us Weekly reports that after three years of dating (and after admitting publicly in 2011 that they were a thing), Dobrev and Somerhalder have called it quits.

Should fans worry that The Vampire Diaries, re-energized this season by the controversial decision to turn main character Elena Gilbert into a vampire, is also kaput?

Nopers. The show’s season finale is set to air May 16, and the CW announced in February that it’ll be coming back for a fifth season sometime next fall.

Meanwhile, a source told Us Weekly that both Dobrev and Somerhalder are “consummate professionals” and “will continue to work together and remain best friends, which is where the relationship started.”

Ian Somerhalder in Fifty Shades of Grey? No, thanks >>

Aw, sad. Back in 2011, Somerhalder told Us Weekly that there were “a million things” he loved about Dobrev. “She truly enjoys life,” he said. “Her desire to experience and appreciate everything around her, and chuckle and enjoy it, is great.”

Dobrev had similar thoughts about her then-main squeeze. “He always has a positive outlook and positive energy, and he’s always happy. He is a glass-half-full kind of guy, not half-empty.”

Looks like Stefan has the upper hand now, eh?