The annual party for the Met’s Costume Institute Ball is elegant, photographed by press around the world, and jammed with A-list stars. But Gwyneth Paltrow had a lousy time anyway. 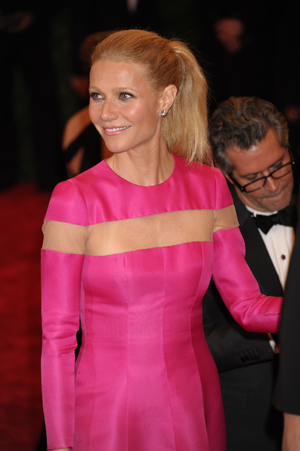 “It was so un-fun. It was boiling,” she said. Well, Gwyneth, you did wear a tight long-sleeved gown in May, but we’ll put that aside.

“I did not enjoy it at all,” the Iron Man 3 star complained.

She also told the paper why she and famous husband Chris Martin are rarely photographed together on the red carpet, and didn’t appear as a couple that night, entering the party separately: They like to keep their decade-long union as “private” as possible.

Um, so, standing together on a red carpet compromises this privacy? Really? OK.

Gwyneth says Botox made her look like Joan Rivers >>

Paltrow copped a better attitude when talking to Entertainment Weekly. For the entertainment magazine, Paltrow had compliments for the Michael Kors dress worn by Victoria’s Secret model Miranda Kerr: “really beautiful. It was a little punk-y. She’s just so pretty, it’s abnormal.”

Paltrow was so impressed by Kerr’s pulchritude that she asked her, “Is it weird to be that pretty?” Kerr reportedly answered “No.”

Not for you, Miranda Kerr, you’re used to it. Some of us might find it a refreshing change to be paid big money to be photographed.