Hannibal saves the day when Jack and Will track down an organ thief, but he also does a lot of killing. 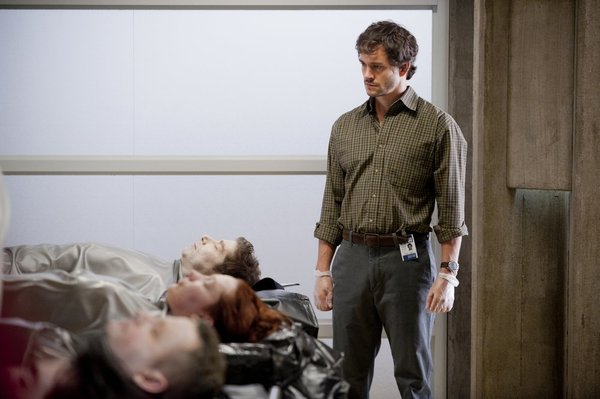 The Chesapeake Ripper is at it again, but so is some other crazy dude who is trying to harvest people’s organs. The trend seems to be that the Ripper doesn’t have a style of his own except for “elegant” as Graham (Hugh Dancy) likes to call it. Instead, he copies other murderers’ styles to just throw the whole FBI for a loop. It appears he loves messing with Jack the most (Laurence Fishburne) — the ultimate arch-nemesis in the making.

Once Graham and the FBI figure out there’s an organ hoarder on the loose, Hannibal (Mads Mikkelsen) goes on a straight up murdering rampage. But, he does it so calmly it really can’t be called a rampage. It’s more of an ethical cleansing. He inadvertently admits to Will later that the Ripper is taking these people’s organs because they don’t deserve them, especially the rude ones. He thinks the victims are a stain on society’s expensive white linen sheets. Maybe he’s just doing us all a favor?

He does manage to take a break from his rude people genocide to meet up with his very own therapist, Dr. Bedelia Du Maurier (Gillian Anderson). It is important to note that they have an unconventional relationship, but she makes it clear that they are not friends. She also says he’s wearing a “well-tailored person suit.” Don’t give him any ideas there, doc. He seems very offended by this and also wants to prove to her that he can make friends.

Meanwhile, Graham and Jack follow a lead that takes them straight to the organ thief who is in the process of highjacking someone’s kidney. He really only wants the organs and doesn’t want to kill the guy, but he’s doing a very poor job. Jack has invited Dr. Lecter along and asks him to get in the mix. An ex-surgeon, Hannibal is actually able to save the victim’s life and his kidney, while Jack and Graham close one of their cases.

Later, Hannibal tells Graham that he quit being a surgeon because he had too many people die on his watch. Now he’s transferred his passion for medicine into the culinary arts and heals people’s minds. He forgot to mention that he also brutally murders annoying people and serves their organs to his “friends” at lovely dinner parties. Bon appetit!