Grey’s Anatomy explores its musical interests once again. This time the result is downright romantic. 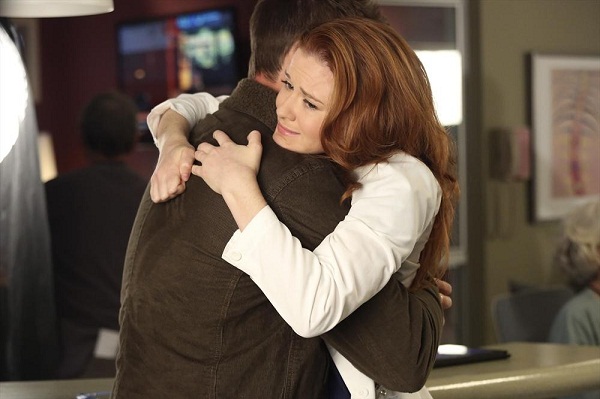 ABC’s Grey’s Anatomy is no stranger to good music. The show practically set the precedent for having good new music featured on television shows. It also had that one episode where it pretty much performed a musical. Everyone swore the show jumped the shark, but it turned out it didn’t. Now Grey’s used music (and dance) to move the show forward once again.

This week, Grey’s Anatomy featured a flash mob, an ’80s song, and a proposal. And it still didn’t jump the shark.

Since April Kepner (Sarah Drew) had a spiritual and emotional breakdown (thanks to religion and Jackson Avery, played by Jesse Williams) and failed her boards, she’s spent the past year as a resident yet again. For the most part, though, new chief Owen Hunt (Kevin McKidd) has treated her like a real doctor. April gets a lot of slack from Grey, Yang, and the gang, but Hunt is convinced she’s a capable doctor, especially during crisis situations.

Until last night, that is. Kepner spent the first part of the episode being thrown off cases. Every time she thought she’d see the inside of the O.R., Hunt sent her back to the E.R. After all, there was a massive storm coming, they had to prepare, and emergency preparedness is where she shines. Still, she wanted to cut.

When her on-again, off-again boyfriend’s rig showed up with a twitching patient, April was giddy at the thought of maybe finally getting into surgery. Until she realized the seizing man was actually a dancer. Out of nowhere another ambulance with more dancers appeared, and soon they were performing a whole routine to “I’m Gonna Be (500 Miles)” by The Proclaimers. Then her new boyfriend appeared, dancing along with the crew before finally professing his love and handing her a ring.

She said yes. And, of course, Avery seems less than thrilled.

We can’t wait to see what happens for the couple (and the rest of the doctors) on next week’s finale.