Jeff is finally ready to graduate, but first he must defeat evil Jeff from the darkest timeline in an awesome paintball duel to the death! 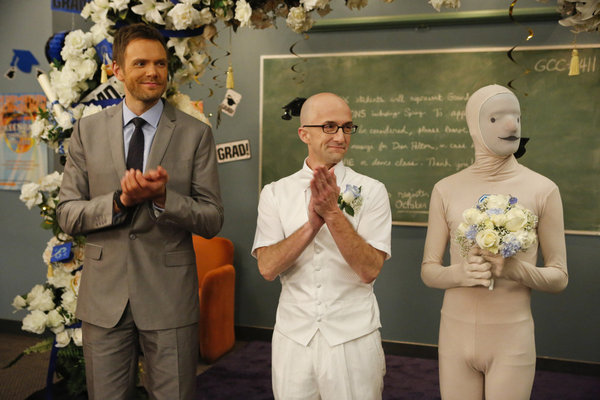 The time is finally upon us. Bust out your tissues or your laugh masks and say goodbye to your favorite quirky show until… who knows when? Still not picked up for another season, we don’t know if we’re saying goodbye to the best study group friends for summer or forever.

It’s been four years and Jeff Winger (Joel McHale) is finally graduating with a degree in education, of all things. After all this time, he’s still the only group member ready to graduate. Maybe it’s because the rest of them are spending too much time in alternate universes, protesting, sucking up, going to church and not understanding anything about the grown up world (I’m looking at you Troy). And then there’s Pierce who’s too close to death to even care (That’s right, Chevy Chase returned for the finale episode!).

Jeff is offered a job with his old law firm immediately, but he’s not sure he can go back to his old ways. He’s also not sure if the group, especially Abed, will be able to survive without him. He’s conceited as always, but it’s still kind of true.

Now, here’s where things get weird. Jeff is about to roll a die when the darkest timeline returns and the evil Jeff and study group pop up. Abed runs into evil Jeff and is transported to the darkest timeline through the wonder of a timeline-transporting paintball gun. Imagine you read that last line with a booming mad scientist’s voice. It’s the only way to do such a device justice.

The two sides battle it out in the raddest, most Matrix-y game of paintball madness yet to be seen in any timeline anywhere. Chang even sacrifices himself in a dramatic act of “friendship” and the good side ultimately wins the battle.

In the end, we learn this is all in Jeff’s mind and he needs imaginary Abed to literally slap him in the face and tell him he’s just afraid of leaving the group behind. Maybe Jeff is the one who needs Abed?

Jeff finally graduates and in a touching scene says one of the sweetest lines uttered through all four seasons, “I’m so used to being the guy who can talk his way out of anything, but what do you say when you don’t want a way out?”

Jeff decides that he’s not going back to his old law firm. Instead, he’s going to work for a small firm who helps the good guys. Looks like he really received an education at Greendale after all.