Zoe Saldana’s suiting up for Guardians of the Galaxy as a strong-willed alien. With a role like that, what’s a girl to wear? 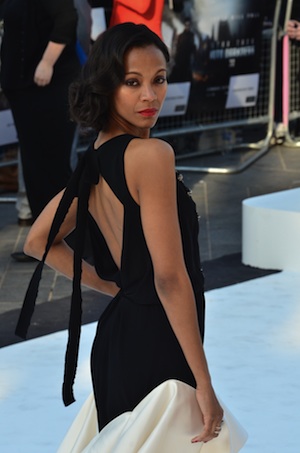 Zoe Saldana‘s no stranger to the sci-fi or comic book genre. She’s currently the First Lady of the Star Trek series and previously appeared as a giant humanoid in James Cameron’s Avatar. Next year, she’ll take her first step into the Marvel Cinematic Universe.

Saldana was recently cast as Gamora in Marvel’s Guardians of the Galaxy. Her character’s a green alien who’s also a highly-trained assassin. The film’s currently in pre-production, and she told MTV that they’re hard at work on her costume.

“I’m in the process right now of the evolution of conceiving Gamora’s look. It’s exciting,” she exclaimed. “We’re trying to work out comfort also, because you know that I definitely want to be involved in the stunt-doing of my character.”

Guardians of the Galaxy follows a ragtag group of intergalactic heroes. When it comes to Marvel teams, they’re definitely not the Avengers.

“It feels unique, but it doesn’t feel like it hasn’t been done before,” Saldana said. “I love the levity in the script and I like the casting of it. I’ve been a fan of Chris Pratt and I think that his gifted, natural comedic timing might come in handy to play someone like Star-Lord.”

Marvel’s Guardians of the Galaxy is directed by James Gunn and opens in theaters Aug. 1, 2014.