David Bowie has never been one to shy away from controversy. And it seems that the video for his new song “The Next Day” is no different. 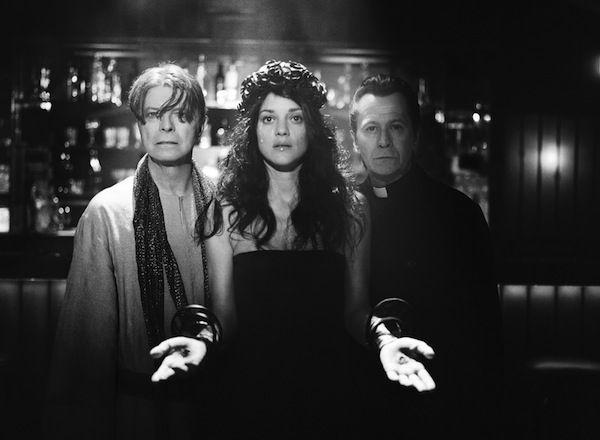 The video for the title track off David Bowie’s new album, The Next Day, opens up with a priest (Gary Oldman) punching out a hungry beggar and then accompanying a blind escort carrying two eyeballs on a tray into a seedy nightclub/brothel.

And it only gets weirder from there.

Bowie performs on the bar’s stage as a Christ-like figure in a flowing burlap robe. The brothel is filled with various clergymen and scantily clad women while Oldman eyes A-list actress Marion Cotillard, playing a red-wine-drinking lady of the night.

Now, let’s pause for a minute here. It’s hard for anyone to deny that Bowie’s video is not a harsh criticism of the Catholic Church. Religious imagery abounds while Bowie sings, “And the priest stiff in hate now demanding fun begin / Of his women dressed as men for the pleasure of that priest.”

But lyrics aside, the video is basically a “Who’s Who” of Catholic history — there’s the self-flagellating priest, the red-robed cardinal who gives money to those who kiss his hand, the brief Joan of Arc appearance and, of course, the stigmata.

Halfway through her strangely sexual dance with Oldman, Marion Cotillard’s palms begin to comically gush blood all over the dance floor, herself and the mostly nude albino woman dancing in the background.

Nope, not making this up.

Oldman screams at Bowie, “Do you see this? This is your doing! You call yourself a prophet?”

Oh Gary, didn’t Sunday school teach you anything? In the King James version of the Bible, Matthew, Chapter 7, Verse 15 states: “Beware of false prophets, which come to you in sheep’s clothing, but inwardly they are ravening wolves.” News flash, Gary: Bowie’s calling you a false prophet.

Bowie, the true prophet in the video, gets stoned, Cotillard arises in a saintly pose à la the Virgin Mary and in a curtain call moment, Bowie stands on a platform in a shaft of light with his hands raised, thanks his friends Gary and Marion and ascends into Heaven… I mean, disappears.

It took just two hours for YouTube to take the video down, citing a terms of service violation, but the video was restored a few hours later. In a statement to Billboard, a YouTube spokesman explained that “with the massive volume of videos on our site, sometimes we make the wrong call.”

Although, the Catholic League would say the right call was made. In a statement on their website, Catholic League president Bill Donahue called Bowie a “switch-hitting, bisexual senior citizen from London” whose video “reflects the artist — it is a mess.”

Name calling aside, it’s clear that Bowie made the video to be controversial and push buttons.

Though we have it posted below, be warned that the video is certainly not work-safe. It’s also not safe for kids or puppies or people who are easily offended. It’s all-around not safe.

But Bowie wasn’t going for safe, was he?

Watch the video below and let us know in the comments what you think. Is it blasphemy? Art? Both? Or neither?