Penn Badgley gets straight to the point about his former relationship with ex-girlfriend Blake Lively in the June issue of ELLE magazine. It seems like they were friendly — but not too friendly — post-breakup. 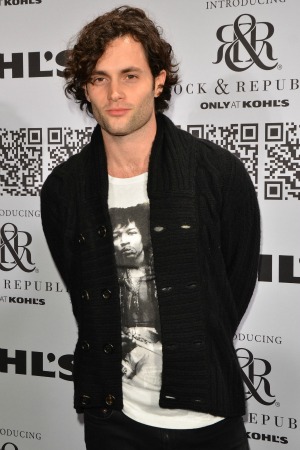 What do you do when your ex-girlfriend gets married to a big movie star and you still have to work together each day? That’s exactly what Gossip Girl‘s Penn Badgley had to experience when his ex Blake Lively married Hollywood hunk Ryan Reynolds last year.

The actor opened up about the relationship in the June edition of ELLE magazine when he was asked what it was like to be on set with Lively after the fall nuptials.

Badgley said they were “ultimately professional” but that he didn’t send a wedding gift.

The former couple met on the set of the CW show and dated for two-and-a-half years. Even after their breakup in 2010, the duo remained friendly since they had to work with each other every day.

However, Lively wasn’t sharing her innermost secrets with her ex because Badgley found out about the wedding the way everyone else did: on the internet. There are always lessons to be learned from any relationship, though.

Badgley shared about his experience with Lively, “I don’t know if I can distill it into a sentence, or even articulate it. We were very much caught up in the show, which itself was a six-year endurance test. Our relationship was a part of that and helped us through it. I mean, like anything valuable, it was good and it was bad and it was a learning experience.”

The former castmates probably won’t be going on double dates any time soon, but the magazine wondered if his sensitive character, nicknamed Lonely Boy, gave his dates a preconceived notion of who he actually was.

He said, “Some of them do. But the kind of women I’m interested in — they’re smart enough not to expect me to be Dan. In fact, they probably didn’t watch the show.”

The one girl he is interested in now is girlfriend Zoe Kravitz, the daughter of musician Lenny Kravitz and actress Lisa Bonet. The 26-year-old talked about how the two make it work when they both have demanding careers.

Badgley revealed, “There’s definitely no secret. I’d say honesty is always the best policy. There are always a lot of arguments — but even if honesty starts some, it avoids bigger ones.”

What Hollywood’s hottest men want in a woman >>

Another person he does have to get along with, though, is Zoe’s dad. While dating a rock star’s daughter might be intimidating, it seems like the two have a congenial friendship.

He talks about a night out on the town with the “American Woman” singer. “We get along, we talk music. He took me to Harlem to see this little jazz show in the back of a church. It was just s***ty fluorescent lights and a small stage piano, but this band tore it up.”

While he isn’t looking to follow in Zoe’s dad’s footsteps, he is currently seen onscreen in the indie film Greetings From Tim Buckley as the late musician Jeff Buckley.

Does he take his musical talents seriously?

“I’ve written a song for every woman I’ve been with,” the romantic actor said, revealing that his song for Zoe is “a sprawling meditation on love.”

That Zoe Kravitz is one lucky gal!