The supermodel fiancée of sexy singer John Legend is lashing out against a story that puts him in a restaurant bathroom making out with a stranger. 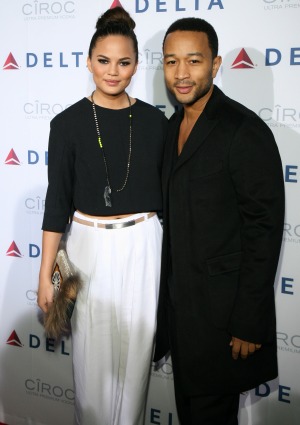 The New York Post says that John Legend had a sexy bathroom encounter with an attractive blonde last week, and now his fiancée is pissed — but not at the singer.

Chrissy Teigen put the Post on blast for their story, which claimed Legend romanced the blonde at New York nightspot Acme last Friday night in a club bathroom.

“He was walking in, and just grabbed her arm and brought her with him,” a witness told the paper.

Sports Illustrated model Teigen was not amused — but her ire was raised not by Legend, but by the Post for their “bulls**t.”

“Just read John cheated on me and in the uber-credible Post,” she wrote, beginning a series of sarcastic tweets about the cheating rumors.

“The @nypost is normally so kind to me. And I am normally not the one to use the term s**trag so I guess we’re both a little off today,” she continued.

“He is probably just getting back at me for cheating on him with @joshrotten last month. I’M SORRY BABY let’s work through this.”

“Gonna buy a parrot for the sole reason of it s**tting on the Post every day. Also singing and companionship.”

The couple didn’t let the so-called scandal get them down. They were spotted at a film screening Tuesday night looking cozy as ever.

“They seemed very much together,” a witness told the NY Post. “They were beaming and happy and holding hands.”

Legend and Teigen announced their engagement in December 2011.

25 mins ago
by Kay Snowden