Yes! Yes! Yes! The Billboard awards hit a solid bulls-eye when it decided to give Prince its Icon award. If James Brown, Jimi Hendrix and Lenny Kravitz had a kid, and the kid did his own thang that no imitator could touch, it would be Prince. Here we honor the man, the symbol, the legend.

Let’s just get the most obvious reason that Prince is an icon out of the way. His music is the type that transcends genre, time, place and generations. No matter how many thousands of times we hear “Purple Rain,” “Raspberry Beret,” “1999,” “I Would Die for You,” “Little Red Corvette,” “When Doves Cry” or “Kiss,” we are going to drop everything, turn up the tuneage and become a 5-foot 2-inch funksta with the sound and lungs of a man twice that size. His music is just that life-changing. Prince has over 30 albums under his rhinestone belt, and every Prince fan has their playlist of favorites. Prince brings the funk, and we gobble it up.

Just as Prince’s music can be difficult to define, so can his style. But he’s got it, and he’s got it in abundance. There’s no argument, the boy is supah-fly. He’s sexy, creepy, gorgeous and disturbing. He owns his look and takes risks only he can get away with. If you put half of his zoot suits and fashion risks on someone else, they would be openly mocked. But not Prince. He delivers the craziest of looks with shock and a hint of swagger. 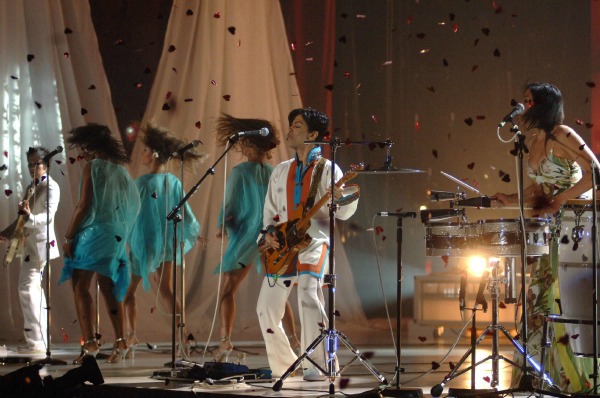 We all know that Prince changed his name to the androgynous he/she symbol, and that he went from being Prince to “The Artist Formerly Known as Prince.” So why did he do that? Was there some deep, philosophical reason he changed his name to the unpronounceable “love symbol?” Not really. He just wanted out of a bad contract with Warner Bros., and changing his name was the only way he could think to do that. Once the contract was null and void, he changed it back. Seems the prince of funk isn’t just off-the-charts cool, he’s also smart — and gutsy.

Get all the news on award shows! Subscribe to our newsletter. >>

You don’t get to the top without stepping on a few toes, and gathering a few diva habits. Prince is no exception, and at times acts more like a queen than a prince. Prince has been known to ask for a limo to drive 80 feet from his dressing room to the stage, and has made other requests that include oxygen bars, purple furniture and that a house be built for him close to a London venue where he was to do several performances. Who can blame him? He and his entourage can only live in a five-star hotel for so long! Considering all the other musicians who make outrageous demands, Prince’s seem legit, because he’s legit. How can you really call yourself an icon if you don’t have a lengthy list of needs and wants?