Kim Kardashian and designer Riccardo Tisci have both been mocked roundly this week for the gown the reality star wore to the Met Gala; now Robin Williams points out the dress looks like one he wore in the 1993 movie Mrs. Doubtfire. 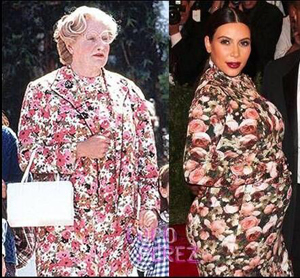 So, I guess we can assume Robin Williams wasn’t a big fan of the floral dress Kim Kardashian wore to the Met Gala? The actor posted an image comparing Kardashian’s dress to the one he wore in the 1993 movie Mrs. Doubtfire, parodying gossip magazine “Who wore it better?” features.

“I think I wore it better!” Williams quipped on Twitter, in a tweet that at press time had been retweeted 145,837 times and favorited 77,156 times.

Williams wasn’t alone in hating Kardashian’s dress. TMZ wrote that she looked like “Sofa King Good” at the party, and wore a “chic maternity floral slipcover.”

The writers at Go Fug Yourself, meanwhile, termed the dress a “hideous floral carpet.”

However, designer Riccardo Tisci, who was one of the co-hosts of the evening as well as the creator of Kardashian’s dress, stands behind his work: “People can say what they want,” Tisci said to Women’s Wear Daily. “To me, pregnancy is the most beautiful thing in the world, and when you celebrate something, you give people flowers.”

Tisci, a good friend of Kanye West and supposedly the guy who got Kim Kardashian into the party after last year’s famous snubbing, added gallantly that, “She was the most beautiful pregnant woman I dressed in my career.”