Rob Kardashian has been charged with battery and theft after a scuffle with a paparazzo in March. 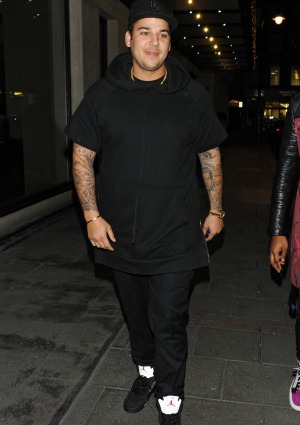 Not content to let his sister Kim Kardashian hog the spotlight, Rob Kardashian is in the news today after being charged with battery and theft.

Rob, often portrayed as surly and lacking motivation on Keeping Up with the Kardashians and its various spin-offs, got into a scuffle with a photographer in March and stands accused of roughing up the paparazzo, grabbing her camera, and stealing the memory card so she couldn’t sell them to the tabloids.

What was the big deal about the photo in the first place? Kardashian, who is working hard to drop the extra pounds he recently piled on after his breakup with Rita Ora, was snapped shirtless in the parking garage of his gym.

Photographer Kassandra Perez claims Kardashian hit her in the face and that she suffered injuries to her arm and chest. She also claims her memory card and the pictures it contained were worth an estimated $30,000. In addition to the criminal case, she is suing in civil court.

Kardashian pleaded not guilty during Wednesday’s proceedings and was released on his own recognizance despite prosecutors asking for $21,000 bail.

Sharp-eyed fans may have spotted a familiar face with Rob in the courtroom: He is being represented by Robert Shapiro, a contemporary of Rob’s late father who also worked on the infamous O.J. Simpson murder trial.

Keep up with the Kardashians and all your favorite stars — subscribe to the SheKnows Entertainment newsletter! >>

Kim Kardashian is “selfish”, says brother
How Kim Kardashian wormed her way into the Met Gala
Khloe Kardashian: Kanye West knows how to deal with Kim