According to a new report, Liam Hemsworth’s older brothers staged a love intervention. They want their little brother to call the Miley Cyrus romance off. 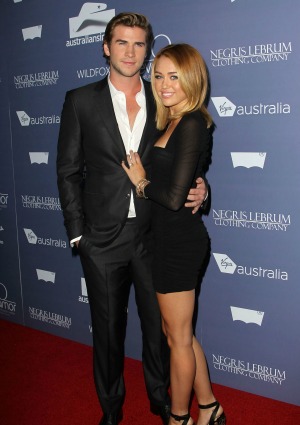 Liam Hemsworth seems to be taking the advice his big brothers dished out to him about his love life. On Tuesday, Us Weekly reported that The Hunger Games star’s older brothers, Chris and Luke, staged an intervention about ending his engagement to Miley Cyrus.

A source told Us Weekly, “They want him to end the romance for good.”

While the romance hasn’t ended completely, the couple has taken a step back from walking down the aisle. Cyrus and her boyfriend of almost four years got engaged last June and the plans for having three ceremonies in different cities have definitely cooled.

In a recent interview with V Magazine, Cyrus shared that their lives are very busy. “I don’t have time to go to Starbucks with my boyfriend every morning. I wish I did, but I don’t. I’d rather chill at my house and be there for the time I actually get to spend with him.”

This statement comes on the heels of a very public separation in the early spring when the former Hannah Montana star stopped wearing her engagement ring and her Aussie fiancé hightailed it to Australia for vacation. There were even rumors that Hemsworth cheated on Cyrus with Mad Men star January Jones.

Miley Cyrus still “committed” but keeping it to herself >>

Insiders are saying that “Liam’s pulling away.”

As recently as May 1, the couple were spotted in the Hollywood area, but not partying with the each other. The 20-year-old star was at Beacher’s Madhouse at the Roosevelt Hotel while her 23-year-old boyfriend was off at the celebrity favorite Chateau Marmont.

While a couple certainly doesn’t have to spend every waking moment together, Cyrus has made no secret that her new album is at the top of her list.

In the V Magazine interview she said, “I put this record before everything, and I’ve never done that with anything. I’ve put too much into this record to put anything else in front of it.”

It looks like Hemsworth has to either take the No. 2 position or take his big brothers’ advice.