Everything’s falling into place for Disney’s Cinderella. Shortly after casting the leading lady, the studio has found her dutiful Prince. Cue Richard Madden! 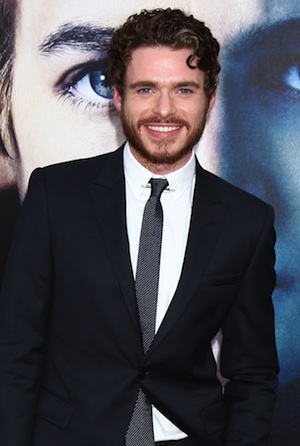 Disney has found a major piece of its Cinderella puzzle. Wednesday, the studio announced that it has cast its Prince. He’ll join the previously confirmed Lily James as the film’s title character.

Cinderella gets an actress from Downton Abbey >>

Richard Madden will play the young royal who’ll sweep Cinderella off her feet. The actor’s no stranger to portraying charming nobleman. He currently stars as Robb Stark on HBO’s Game of Thrones. There, he’s a man of stature who marries a common girl instead of the arranged bride chosen by his parents.

We’re sure Madden had to fight off hundreds of actors to play Cinderella’s main man. He has the right mix of talent and good looks — and his Scottish brogue doesn’t hurt. We doubt they’ll let him use his real accent in the film, but we can dream, can’t we?

Disney’s Cinderella will be a live-action adaptation of the classic fairytale. While James and Madden appear as the lovelorn couple, Oscar winner Cate Blanchett will star as Cinderella’s wicked stepmother. The film is directed by Sir Kenneth Branagh, who recently wrapped production on Jack Ryan.

Cinderella’s screenplay was co-written by Aline Brosh McKenna and Chris Weitz. The film is scheduled to hit theaters sometime in 2014. It’s just one of many fairytales getting the live-action treatment. There’s also Maleficent, which is based on the story of Sleeping Beauty. It stars Angelina Jolie as the vengeful sorceress and will be released next summer (July 2, 2014).

Do you think Madden will make a good Prince?