The singer infuriates fans (and used-to-be-fans) in Boston by showing up many hours late for a show that had already been canceled and rescheduled. 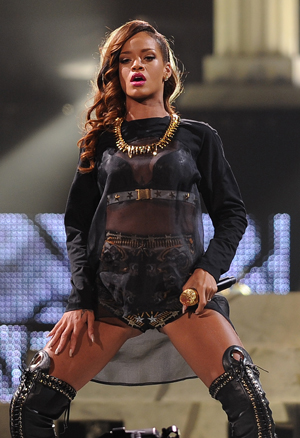 A three-hour wait for a one-hour show.

That’s what Rihanna fans were complaining about after the “We Found Love” diva finally went onstage three solid hours after the show was supposed to start.

To add insult to injury, there wasn’t even an opening act to kill the dead air.

Plus, the Boston show had been originally scheduled for March 10, but was canceled after Rihanna’s camp announced the singer had laryngitis.

So the concertgoers had time to work up a head of steam in the three hours they waited.

One annoyed fan tweeted “@rihanna just showed up over three hours late in Boston for a make up show since she canceled a few months back due to sickness. I’m over her.”

Another, responding to rumors that the singer was late due to watching a basketball game between the Chicago Bulls and Miami Heat: “@rihanna 2-3 hrs late for your show in Boston, huh??! #disrespectful #noexcuse basketball was more important huh?? Don’t come back.”

Fans also said Rihanna was booed at the show: “Boston waited 2 months and then Rihanna was 3 hours late to her packed concert. She deserved to get booed! We were mad as hell.”

Rihanna herself didn’t apologize for being late, instead tweeting “#BOSTON I will never forget this night!!! I truly have deeper love for you now!!! Thank you for making it extra special!! #DWT.”

Rihanna is known for showing up late to commitments. She made headlines after showing up four hours late to a high school appearance in March, and her 777 Tour famously derailed in November after the singer skipped out on/was very late to several events, causing the journalists on the tour to riot and write awful stories about her.