Somebody on Audi’s ad team has a great sense of humor: The new spot for the car maker features the actors racing to see who’s going to buy lunch. 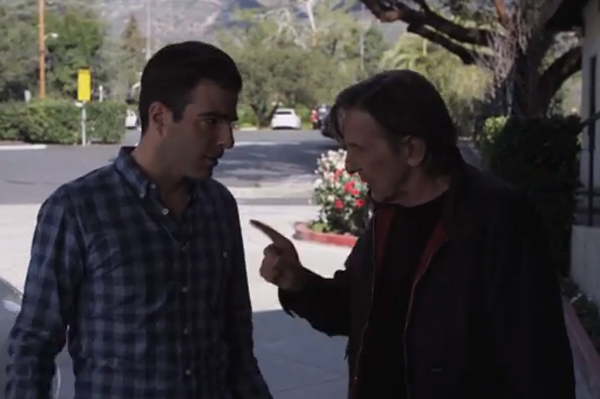 It’s the rare Star Trek fan who wouldn’t want to see a battle between Old Spock and New Spock. What’s really strange about the TV showdown between Zachary Quinto and Leonard Nimoy: It makes for a car commercial that’s actually fun to watch.

Quinto and Nimoy both star in the next Star Trek film, Star Trek Into Darkness, set to bow on May 17, and a new commercial from Audi, which purports that the two are friends and rivals in real life.

In the spot, when Nimoy beats Quinto in a chess game, the latter lays down a challenge: Meet you at the club for golf, whoever gets there last buys lunch.

Quinto, of course, is driving a stylish new Audi tricked out with a trunk giant enough to hold his clubs and a GPS system that speeds him on his way. Nimoy, in his not-Audi, is forced to laboriously buckle his clubs into the front passenger seat and poke along slowly, singing his 1960s bizarre non-hit song, “The Ballad of Bilbo Baggins.”

Naturally, Quinto wins, and he taunts Nimoy: “I can practice my swing if you need to pull over and take a nap.”

“Smarta**,” snaps Nimoy, who complains that he feels like he’s stuck in a black hole. Hey, just like Planet Vulcan was pawned by a black hole in the last Star Trek! Hey, we get it!