Lauryn Hill releases a new track and proves yet again that she’s not afraid of authority.

Lauryn Hill recently wrote on Tumblr about an “impending legal deadline” that forced her hand to release new music. 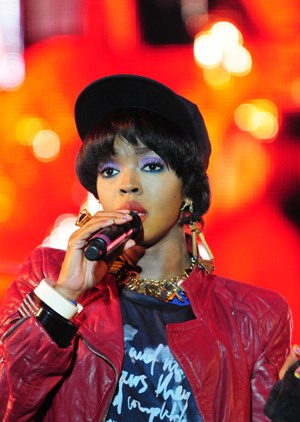 Perhaps she’s talking crap about her recently signed label, Sony? According to MTV, they gave her $1 million to release at least five songs and a new album — so c’mon girl, you need to make music if you’re getting paid to do so! That is what contracts and deals are about — binding stipulations and deadlines.

Being rebellious, she doesn’t care too much for the law. After all, she’s facing a forced extended vacay (in jail) for unpaid taxes.

What are we talking about? Get the latest details on the tax story here! >>

What do you think, folks? Ms. Hill sounds an awful lot like a sourpuss making blanket public statements like that. In an indirect way, it’s as though she’s already setting the standards pretty low for her latest release in quite some time.

Someone’s evidently grumpy, but why? The release of “Neurotic Society” answers that in so many ways. The addition of “Compulsory Mix” to the title was presumably bitter retaliation. I’m not going to complain, though, I’m happy she’s back! But she’s certainly not happy in this track. She made sure the listening audience is aware.

Is it her best work? No. Is it still amazing? Of course.

She doesn’t like hierachies and poisonous corporate domination and she makes it known. Her Tumblr account also makes mention of former label-mate Chris Kelly, who recently passed away. The focus of the song is not on the odd aquatic-meets-Chinese-restaurant instrumental, but rather on transmitting messages like these:

Oh, and my personal favorite part:

Lauryn Hill is a gem, a rare jewel that can withstand an extended hiatus and return like a viper, sinking her teeth into music and reminding us she never left. Epic, Ms. Hill, you are epic.

Want the latest on everything Lauryn Hill? Sign up for our newsletter! >>

This is hardly your children’s bedtime story — instead, according to Lauryn, this is a real-life nightmare. Check it out below!

Need new music? Check out some of our other music reviews to inspire your playlist: