At 24, Charlie Barnett is already making a name for himself on NBC’s hottest new show, Chicago Fire. With only a few episodes left, Charlie dishes on the season finale, learning to fight fires, and what’s in store for rookie Peter Mills.

Related story This Actor Is Leaving Chicago Fire, & It Will Never Be the Same 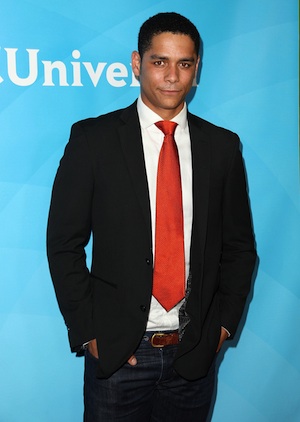 Charlie Barnett is a a quadruple threat. He’s hella good-looking, but isn’t the type to flaunt it. He’s an educated actor, plays a heroic firefighter, and also happens to be a charming, good-natured person who loves his family.

As if the ladies weren’t swooning enough, to top it all off he’s a sailor. He is too many fantasies rolled into one. Can you just give us a second to catch our breath, Charlie?

While we might joke about how sexy the Chicago Fire star is, the truth is he’s a lot more than just good looks. He’s a talented actor whose devoted to his craft.

Charlie grew up performing in theater in Florida and later studied acting at Juilliard. Two years after graduating, he’s already making a name for himself in the industry as rookie firefighter Peter Mills on Wednesday nights on NBC.

Meet the men of Chicago Fire! >>

Possibly even more impressive, is the young actor’s humble and positive outlook on life. “Even though I’ve graduated, I’m still a student. I’m always learning, it’s just a different venue. I feel like now I’m in the real world and the lessons don’t stop. But there’s no homework or grading. I like that part.”

Some of those lessons include on the job firefighting training. Charlie had two different training sessions with the Chicago Fire Department, where he stayed in the fire house, ran drills, learned how to use the tools, and went on runs with real firefighters.

“It’s true life. It’s one of the most valuable experiences of my life,” Charlie said of his time with the real life heroes. “We ran into storage bins filled with smoke and tried to find dummies. It was great. But, being with firefighters has been the most valuable part. We even continue to party with them.”

Chicago Fire is bringing the heat! >>

His newly acquired firefighting skills isn’t the only thing he has in common with his on-screen persona. According to Charlie, he and Mills have quite a lot in common.

“We’re very much alike. We’re both kindhearted and really, really love our families. We’ve been building our name and working toward our dreams our whole lives. We’re both very driven, but when Mills falls off the track he feels like he’s failed. I like to fall off the track sometimes.”

Get the latest news on your fave TV shows! Subscribe to the SheKnows newsletter! >>

And it sounds like Mills may be about to fall off the track before the end of this season. “I can’t say too much,” Charlie teased about the upcoming season finale, “But fans are going to be very surprised. The finale will be really exciting. I can’t wait to actually see it. As for Mills, he will have to face some difficult brick walls. He doesn’t know who he is, what he wants or where he’s going anymore. It’s the polar opposite from where he started.”

The tight-lipped star couldn’t give us anymore dirt than that on Mills or the season finale, but he did open up about what’s in store for him this summer. “I’m going to New York. Then to Monaco. I would love to work. And then hopefully back to Chicago… This city is sitting really well with who I want to be. And the food is great.”

You can catch Charlie on Wednesday nights on NBC, and don’t forget to catch the gripping season finale May 22 at 10/9c!