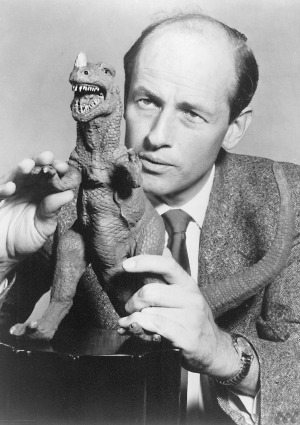 The animation wizard created some of the most fantastical creatures and mythical scenes in cinematic history, including work on films like The Beast From 20,000 Fathoms, Jason and the Argonauts, Clash of the Titans and the Raquel Welch classic One Million Years B.C.

Best known for stop-motion animation, Harryhausen’s painstaking work was photographed one frame at a time. Although he was often credited for only “technical effects” or “special visual effects,” the wizard generally had a much more involved role in the script and direction of the films he worked on.

Filmmakers George Lucas, Steven Spielberg, James Cameron and Peter Jackson all give Harryhausen credit for inspiring their own work.

“Today we lost a master magician with the passing of Ray Harryhausen,” said Darren G. Davis of Bluewater Productions, which publishes Ray Harryhausen Presents, a comic book series based on some of the pioneer’s films.

“Although deeply saddened by the loss, we feel that his legendary work will live on forever, and that we at Bluewater were so very fortunate to be a part of that legacy. We send our thoughts and prayers to his wife Diana, his family and to the legion of fans that feel the affect of his passing.”

“Ray was an inspiration for me. From the first time I saw Jason and the Argonauts and Clash of the Titans, I was spellbound. There are no superlatives worthy enough to let him know what his work meant to me. I feel so blessed for the opportunity to have worked with him throughout the years on numerous comic book adaptations, graphic novel sequels and other projects based on his visionary work. In an entertainment industry dominated by computer generated effects, Ray Harryhausens’s hand-crafted mastery still sparks the imagination like no other — it truly emphasizes the word ‘special’ in special effects.”

“Ray, thank you for all you given us and the wonderment you left behind. You will be missed.”

Stay up to date with all your favorite celebrities — subscribe to the SheKnows Entertainment newsletter! >>