On Tuesday, Carrie Underwood was announced as the official voice of NBC’s Sunday Night Football. She inherited the job from fellow country singer Faith Hill. 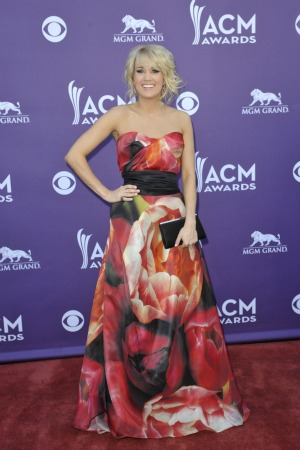 Faith Hill might have exited the job, but Carrie Underwood scored a touchdown when she signed up to be the official singer for Sunday Night Football next season. The country superstar will be heard on the NBC broadcast singing “Waiting All Day for Sunday Night” beginning in the fall.

The song is based on Joan Jett’s original tune “I Hate Myself for Loving You.”

Hill, who has had the role since 2007, announced that she was moving on back in April. She wrote, “Amazing 2 have been part of SNF – an honor. I’ve just let everyone there know it’s time 2 let someone else rock the open.”

According to The Hollywood Reporter, Fred Gaudelli, Sunday Night Football‘s producer, mentioned that Underwood was on their A-list back when they were choosing a singer for the first season in 2006. Those honors went to pop singer Pink. Hill took over the job the following year.

In an official press release on Tuesday, the Grammy winner said, “I am thrilled to be a part of NBC’s Sunday Night Football and am so honored they asked me. I have always loved football season, and it is so exciting to now become part of it every Sunday night!”

Gaudelli added, “Carrie Underwood was our first and only choice to perform the Sunday Night Football opening. She’s one of America’s most popular entertainers and the perfect fit for our show.”

She hasn’t recorded the song yet, but Underwood will head to the studio in the next few weeks.

For fans who can’t wait to hear the Season 4 winner of American Idol, mark your calendars for her big NFL debut. Underwood will be heard on Sunday, September 8 for the first SNF broadcast when the Dallas Cowboys host the New York Giants.