Strap in, ladies – it’s fixin’ to get smokin’ hot in here. Jamie Foxx is easy on the eyes, but that’s not the only reason he’s making our Monday a bit brighter. Mr. Foxx is the sort of alpha male that kicks a** at everything he does and makes women swoon. Here’s why… 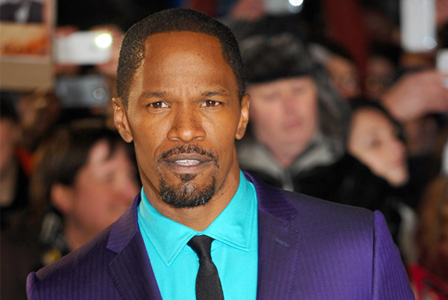 Strap in, ladies – it’s fixin’ to get smokin’ hot in here. Jamie Foxx is easy on the eyes, but that’s not the only reason he’s making our Monday a bit brighter. Mr. Foxx is the sort of alpha male that kicks a** at everything he does and makes women swoon. Here’s why…

A lady loves to be entertained, and Mr. Foxx can deliver. Whether he’s on the ivories, on the comedy stage or on the big screen, Jamie Foxx is always bringing at least seven kinds of smoke.

Jamie Foxx was born Eric Marlon Bishop, but changed his name when he started doing comedy because women were given preferential treatment and put on stage before men. He tells Maxim magazine, “Jamie Foxx is the persona — the party-starter, the emcee, the guy who comes onstage with Kanye West and does whatever. Eric Bishop is the quiet guy who’ll have a glass of wine somewhere quiet and play piano for just a few people. My sister has never called me Jamie Foxx. She always calls me Eric. She thinks that “Jamie Foxx” is a crock and always says, “I am not calling you that s***.”

Jamie was adopted by his grandparents (who had also adopted his mother) when he was 7 months old during his biological parents’ divorce. He was raised in Terrell, Texas, which at the time, was a racially segregated community with a strict Baptist upbringing. Still this humble upbringing would not stand in the way of what would become a Hollywood giant.

Foxx started playing the piano when he was 5 and started performing at his church as a teenager. His second grade teacher recognized him as a comedic talent and bribed his class using Jamie as a reward! Jamie as a reward? Hmmmm. Yeah, that’s pretty much brilliant.

Jamie once got up on stage at a comedy club after his girlfriend dared him to. A star was born. He had already won a musical scholarship to Alliant International University. Among his career highs are his Academy, BAFTA, Golden Globe, Critics’ Choice and SAG awards. He’s been one of People magazine’s “Hottest Bachelors” and “50 Most Beautiful People.”

Recently he was given MTV’s Generation Award. During his acceptance speech for his MTV award, Jamie said, “Anytime somebody tells you that you can’t do something, make sure you do it, because somebody told me that I wouldn’t be able to do music and movies.” Bet that person feels kind of silly right about now. Jamie’s spent his career proving there is very little he can’t do, which makes him made of stuff women have a hard time refusing. 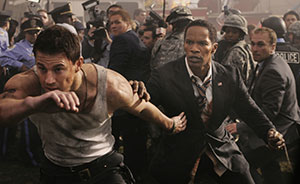 Has Christmas come early this year? In White House Down, Channing Tatum serves as the brawn protecting the president (Foxx) with the White House under attack. A more brilliant two-fer in recent history we cannot recall. Can we take all these “large-and-in-charge” roles from Jamie? First he played a man avenging the mistreatment of his wife in Django Unchained, then the POTUS in White House Down and as Spider-Man’s nemesis in next year’s The Amazing Spider-Man 2. Uh, yeah — we can handle it. As long as Hollywood is serving up Jamie, we’ll take a generous serving, and then we’ll have seconds.

This 45-year-old self-proclaimed bachelor loves the ladies, but doesn’t have a lot of use for marriage, just as he has no desire to reveal the identity of the mother of his two daughters. He told Oprah about his baby momma, “It’s just so cool and calm and that’s all you need. [I] need somebody who’s not thirsty for what I do.” On the matter of marriage, Foxx told GQ magazine, “The way I see it, you stay uncommitted and you die an old, lonely m.f. Or you stay committed and you die a miserable m.f.”

When Kelly Rowland was rumored to be dating Jamie Foxx after the Oscars, Kelly quickly dispelled the gossip, telling hip-hop radio station Shade 45 that, “Jamie is a friend of mine. That was very weird. He’s my buddy. I love Jamie. We’re actually going to do a film together.” 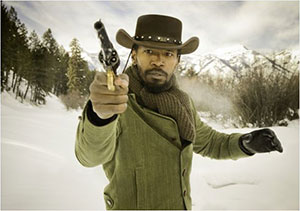 How Mr. Foxx feels about marriage doesn’t reflect how he feels about women. When discussing his Django Unchained role with MovieClips.com, he explains that the thing he loved most about the script was the story of protecting a woman. He said, “I’m not going to be able to cure [slavery]. I’m not going to be able to make a person think one way or another, but what I can do is, I can make sure my woman knows that she’s safe and that’s the most important thing.” All that delivered in a raspy, sexy voice? That’s why Jamie makes this week’s Man Candy Mondays.