Norman finds a new way to be the craziest teenager in town while Norma battles the aggressive men who keep coming into her life. 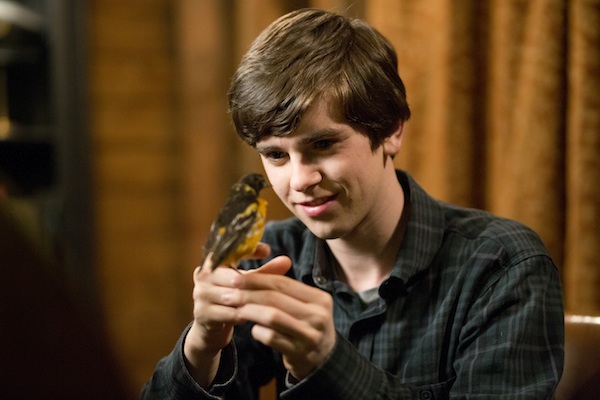 Norman Bates (Freddie Highmore) is a weirdo. Everyone knows it. Especially the catty, gossipy popular girls at school. While Emma’s having a coughing fit and choking on her own phlegm, she runs to the ladies’ room where she overhears the mean girls talking about how pathetic Norman is for thinking he has a shot with Bradley. But, Emma knows the truth and she tells the girls that Bradley did actually sleep with Norman.

Now that the news is out, Bradley’s pissed at Norman and doesn’t want anything to do with him. This all sends Norman deeper into an emotional spiral and deeper into his new hobby: taxidermy. You know, because the kid’s not a complete outcast as it is, let’s throw playing with dead animals into the mix. But, this is definitely foreshadowing the future and explains how he’ll eventually keep his dead mother around like a deceased pet when he’s older and has completely lost it.

Meanwhile, Norma (Vera Farmiga) is making enemies all over the place. She went to Sheriff Romero (Nestor Carbonell) to ask for his support so she could get on the city planning committee. She tried several different flirtatious and manipulative tactics to get his help until she finally moved on to subtle blackmail. Unlike all the rest of the men in this sleepy little town, Romero is not swayed by the dysfunctional Mrs. Bates. He intimidated her by saying she’d better never try to intimidate him. They are not on the same playing field. Romero 1, Norma 0.

Norma also made some enemies with the man in room number nine. He basically said that he’s the lead guy in the teenage Asian sex slave business. And after he tried to intimidate her in several ways, Norma threw all his cash at him and kicked him out of the hotel.

He got his revenge, though. Norma walked into a room and saw the dead and decaying body (a bit of a theme this episode) of Zach Shelby. At least that’s who it looked like. It was hard to tell. He’s not as cute or easily recognizable all gray and bloated.